The following is a project of the prefabricated low-budget church. It is to be consecrated in honor of the Holy Blessed Passion-bearers Princes Boris and Gleb. It is located on the site, which is planned to be allocated to the Saint Olga parish. There is a plan for the construction of large and small churches. Also the building of the family and youth educational center and an adjacent recreational and social zone are planned. This is the project of the small church of the complex, which is planned to be built in the first place. The church is designed for 240 parishioners. The site is located in Minsk, in Vaneeva and Trastsyanetskaya streets. It is next to the green area at the bank of the Svisloch River, in the area between the river and the bike path. The estimated area of the entire complex is 1.03 hectares. The church in this project is located in the western part of the site. In front of the church there is a beautiful view of the river through the green area. In the westernmost part of the site a playground can be organized. 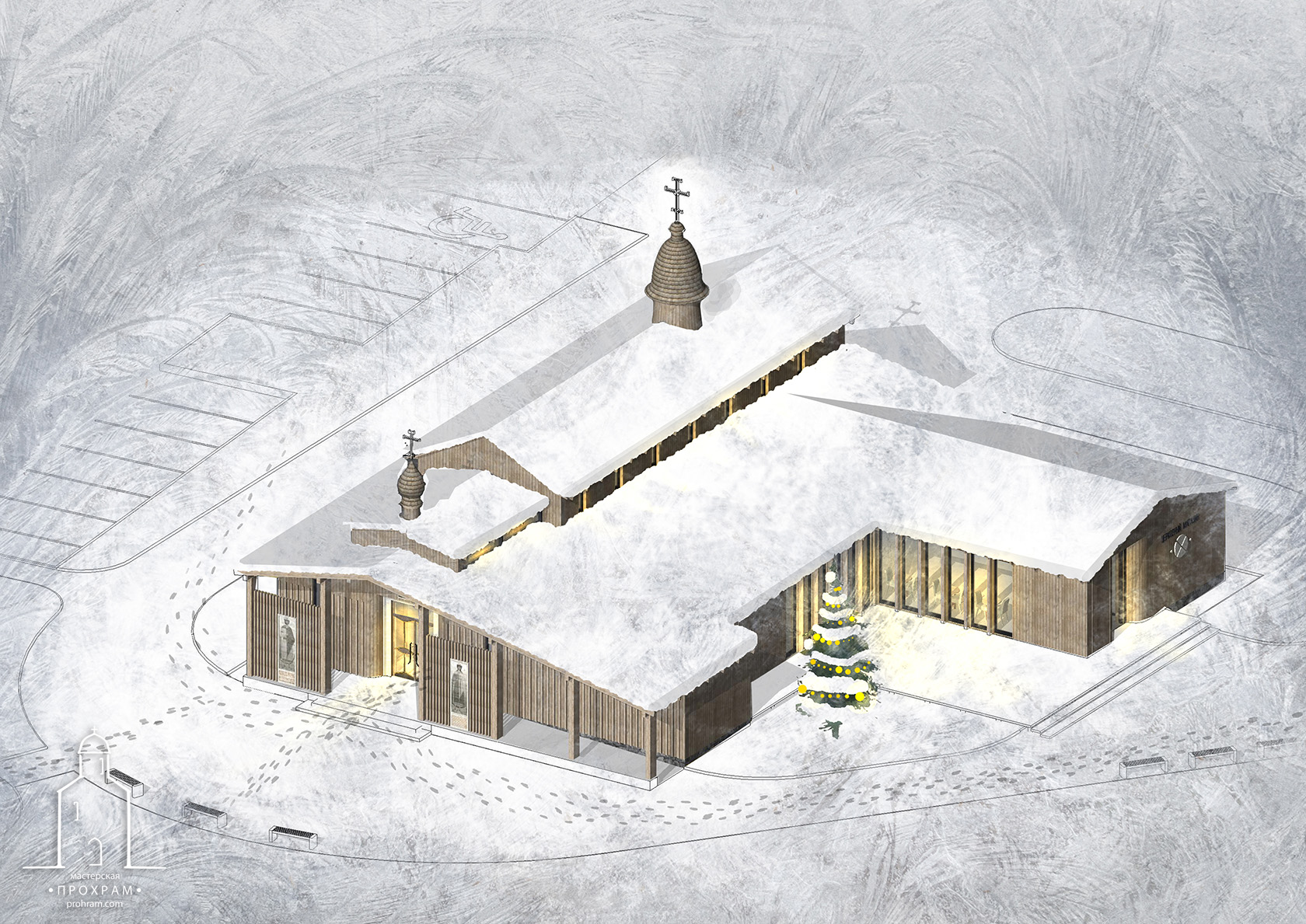 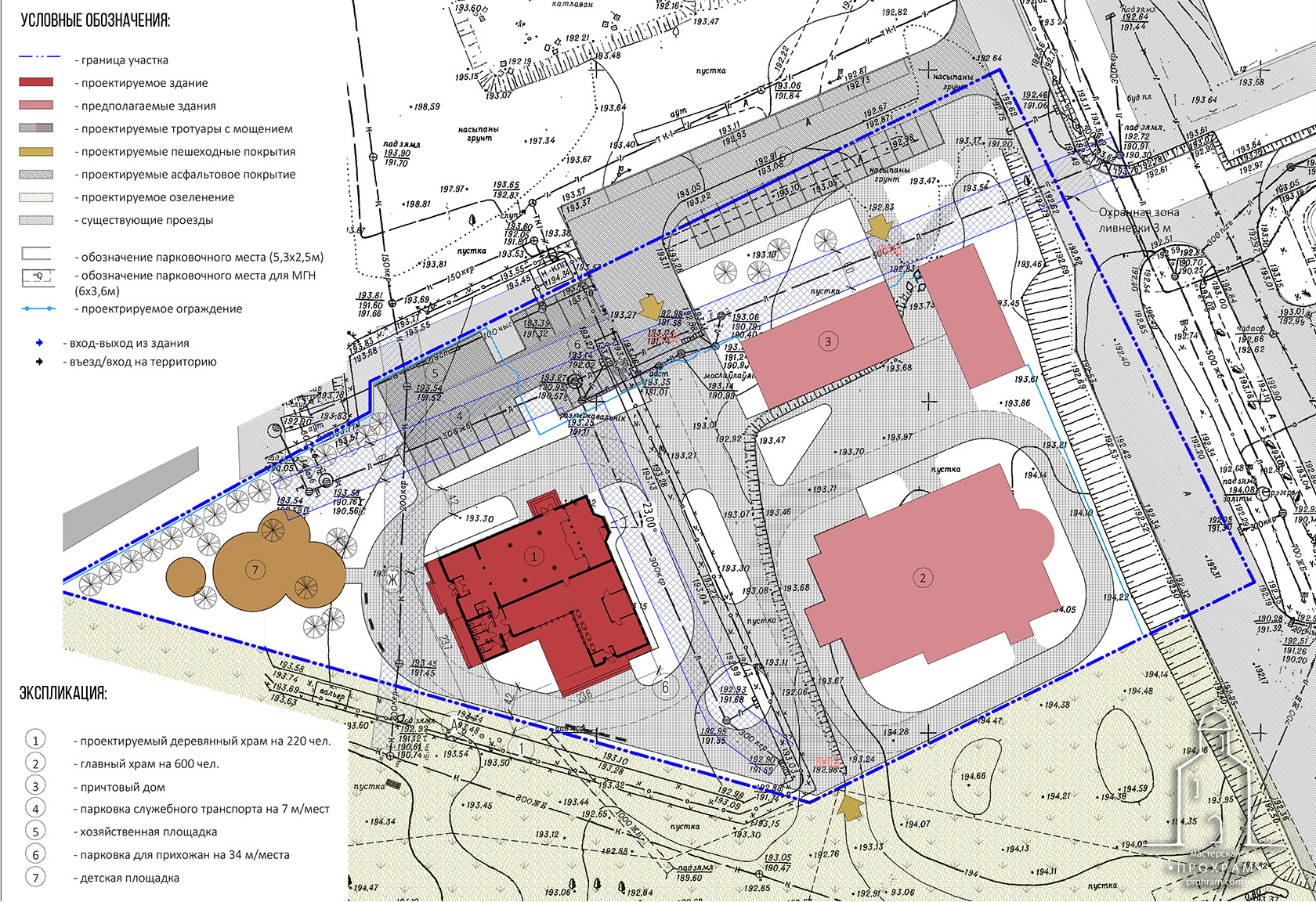 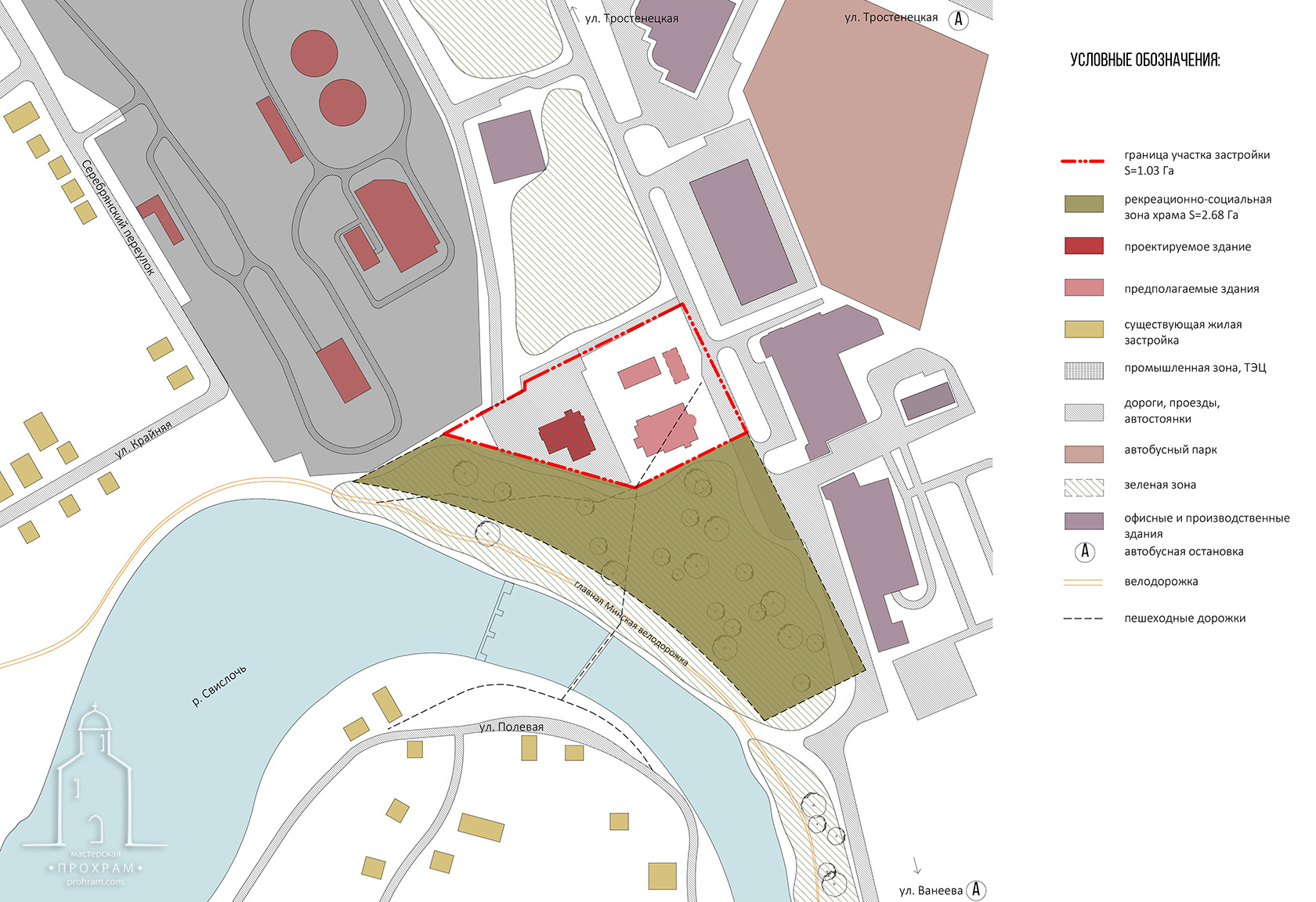 The building is one-story, its architecture is laconic. The prefabricated frame structures suggest the possibility of its construction in a short time. The principle of its structural scheme is a three-aisled basilica with a large lateral annex. The architecture references the wooden churches of the Russian North, but focuses on modern stylistic solutions and constructions.

The church has a narthex with a cloakroom, a church shop and a separate room for cleaning equipment. From the narthex there is an access through the portal-corridor to the bathrooms and public premises (classroom, multifunctional hall). There is also an access to the extra evacuation exit through the southern terrace there. The main body of the church is the basilica proper, rectangular in plan, ending with the sanctuary in the east. The ceilings of the side aisles have a modern bionic wooden lining, reminiscent of a ship's deck. This parallels the image of the church as a ship of salvation. The central part has traditional exposed beams and rafters visible in the interior. On the north side there is a second exit from the main premises of the church. In the interior of the narthex, an open system of beams and rafters is also visible. In front of the entrance to the church there is a large porch. It has a ramp for people with disabilities and for access with baby carriages.

On the south side, there is a classroom and a multifunctional hall, which can be used as a refectory. To the south of the hall is a church shop with a small café. All three rooms are separated by mobile partitions. This makes it possible to combine the rooms into one large one. There is a separate kitchen area. The separate entrance to the church shop and an exit to the summer terrace were also designed.

All bodies are covered with gable roofs with seam metal. The domes are covered with wood shingles. The structural scheme of the building is a wooden frame. The walls consist of the following layers: plasterboard, mineral wool, cement chipboard sheet, mineral wool, graphite foam, plaster, rainscreen (aluminum frame with wooden rails). These layers can be revised at the next design stage, at the same time with the calculation of the foundations. The outer wall lining is made of wooden planking of heat-treated wood and lamellas of glued laminated timber or of heat-treated wood too. The layout of the planking is vertical. Two types of planking widths are used: 100 and 60 mm. There is also a vertical decoration in the form of beams and white stone bas-reliefs on the facades.

The project is completed according to the main architectural and construction regulations. It has modern forms while maintaining the main functional, liturgical and symbolic features of the Orthodox church architecture. 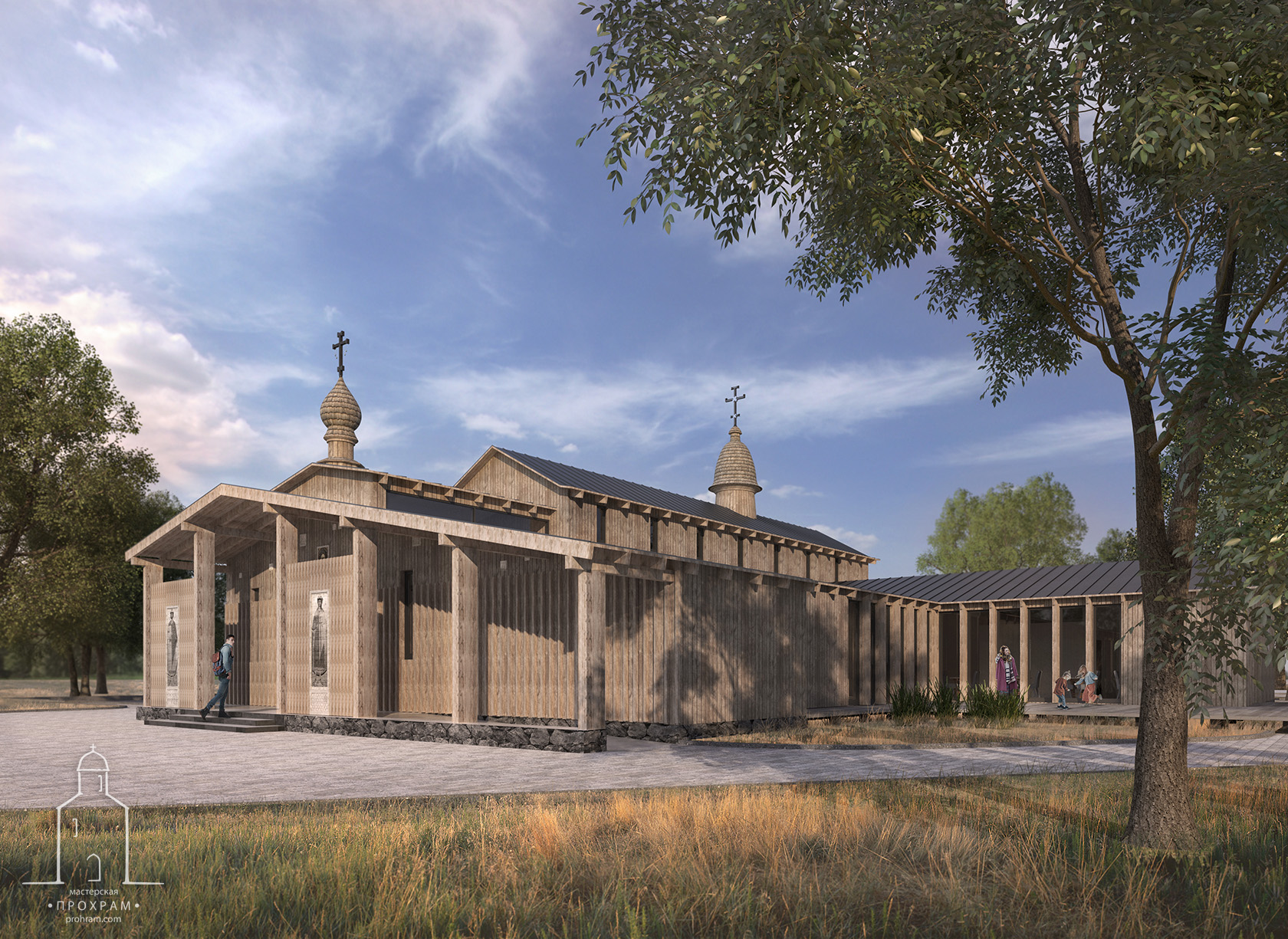 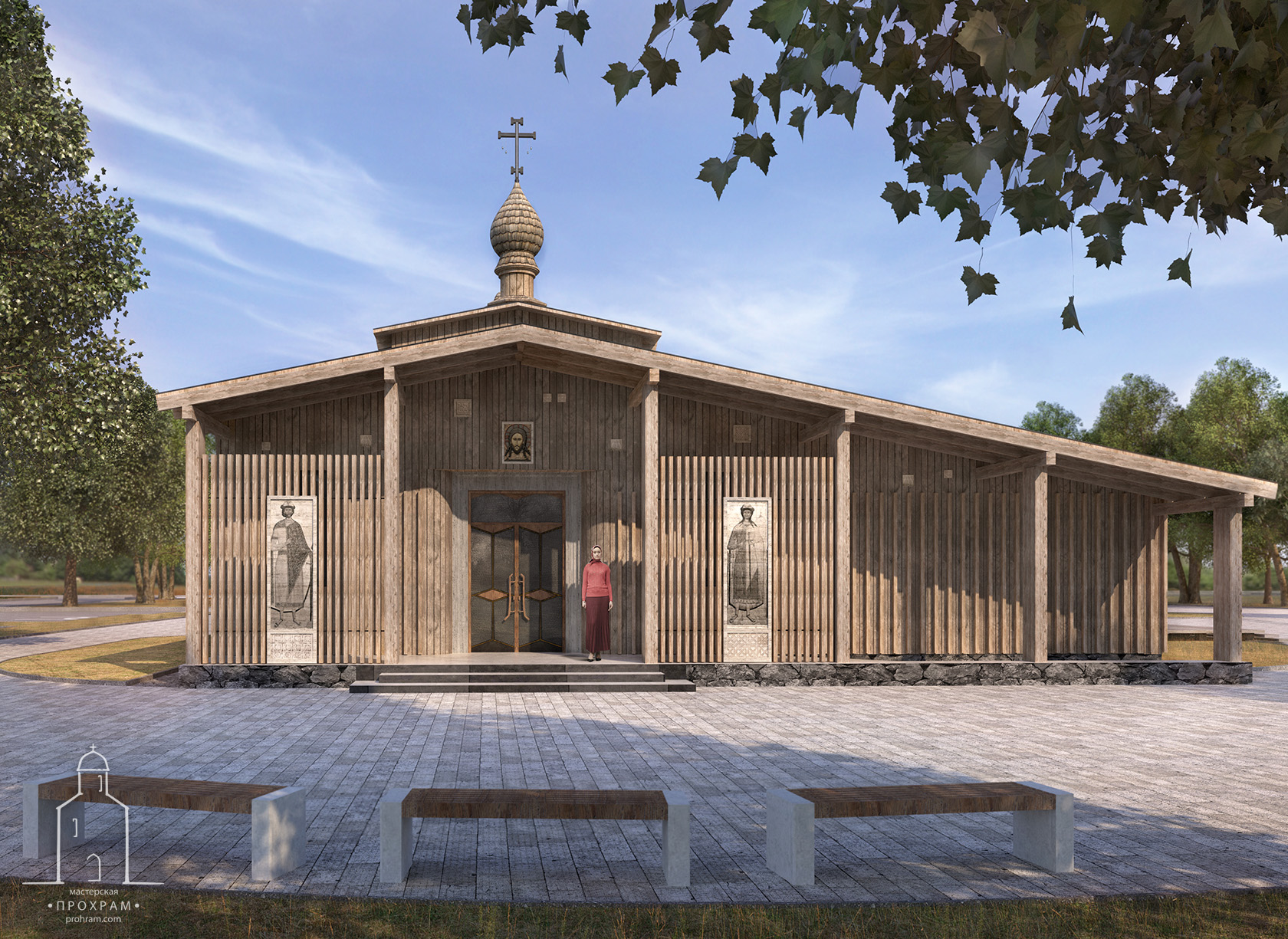 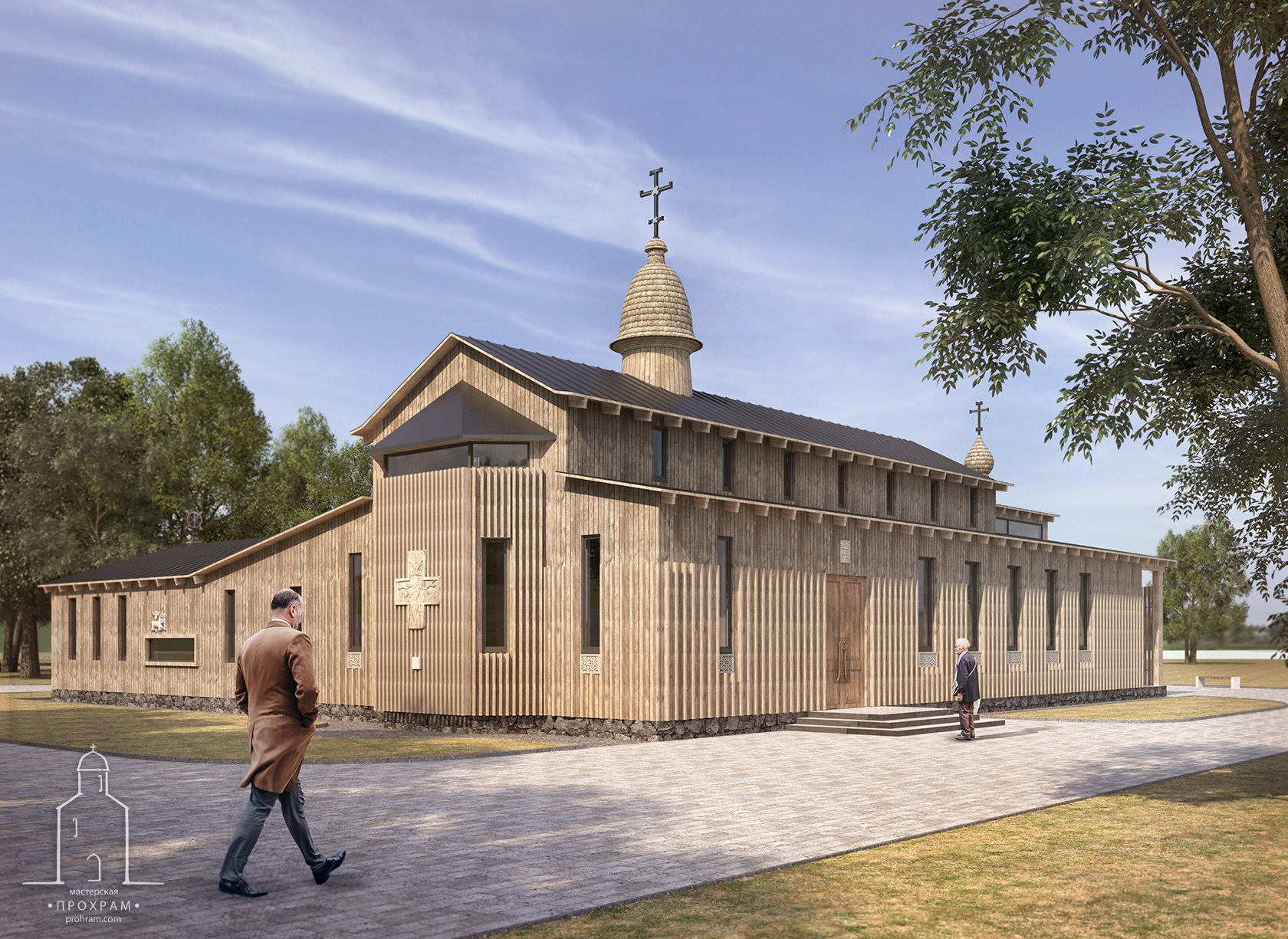 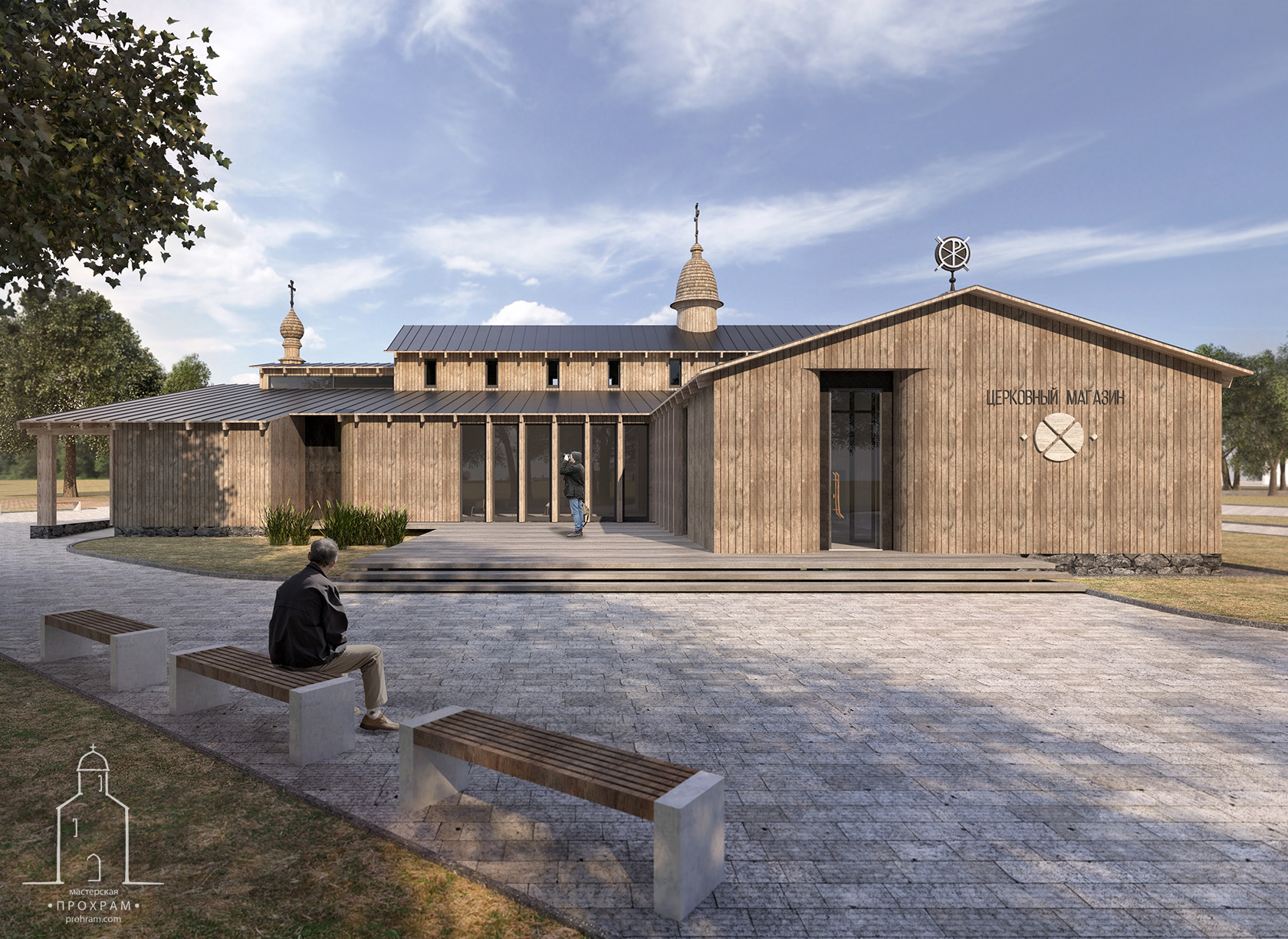 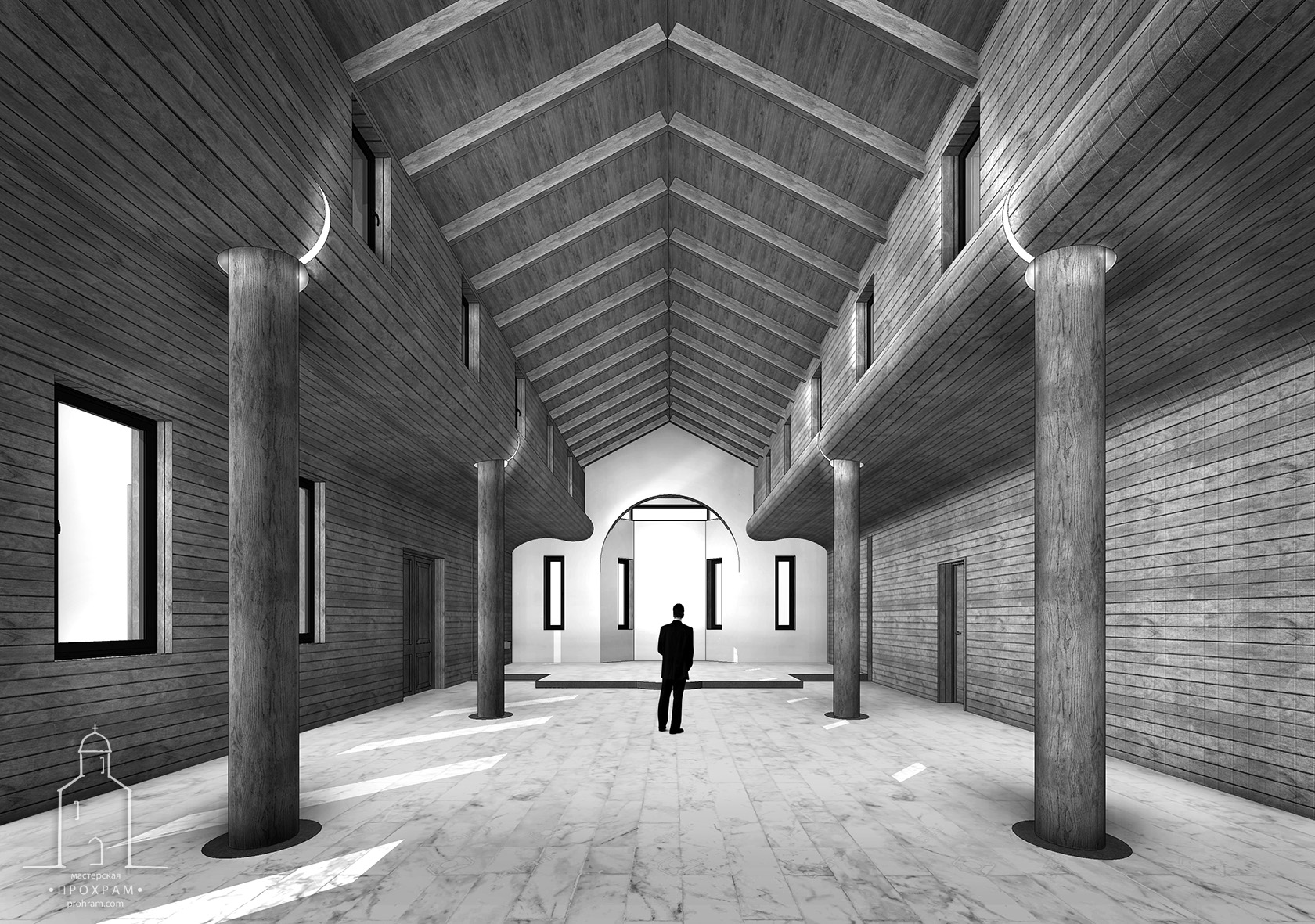