Contest Project of the Processional Cross of the Diocese of Turov

In 2018, a contest was announced to recreate the processional cross of the Diocese of Turov. A few years ago, four medallions were found, which had allegedly been inserted into the once lost Turov Cross. The Belarusian Orthodox Church (BOC) announced a contest with strictly defined specifications for the reconstruction of this cross. According to the assignment, the cross should be four-sided, made in the traditions of the 12th - 13th centuries, have dimensions of 505×210 mm, beam width 35 mm, thickness 15 mm. The material of the cross should be wood (cypress), and metal plates - gold or (and) silver. It was possible to use gemstones. A medallion with the image of the Mother of God is on the left arm of the cross; a medallion with the image of John the Theologian is on the right arm of the cross (not preserved); the lower part (sequentially from the center) is made by St. Cyril of Turov, Abraham of Smolensk, St. Barbara. There is a quote from the work of St. Cyril of Turov "Word on the Deposition of the Body of Christ from the Cross" written on the sides. The back side is blank.

Our sketch design of the reconstructed Cross of Turov is presented in the style typical for the portable erected crosses of the pre-Mongol period of Ancient Russia with reference to the decorative ecclesiastical art of Byzantium.

The composition of the cross is four-sided. The wooden base made of cypress is framed by a box made of gold with chasing. The central composition, formed by a horizontal crossbar is of the Deesis type. The iconographic analysis of the extant image of the Virgin Mary makes it clear that this is the image of the Mother of God Oranta and not Hagiosoritissa (Greek: ἡ Ἁγιοσορίτισσα) - one of the types of the image of the Mother of God without the Child in a three-quarter turn with a prayerful hand gesture. It is this iconography that goes back to the Deesis composition, where the Mother of God prays to Christ (Greek. δέησις). Following the traditional image of the Deesis, there is Christ the Almighty, not the Crucifixion, in the center of the composition on this cross. The image of St. John the Theologian, standing by the cross, is placed on the right side according to the specifications. However, based on the Deesis composition of the depiction of the Virgin Mary on the surviving medallion, the image of St. John the Theologian can be replaced by the medallion of St. John the Baptist, which is more in line with the iconography of the Deesis.

Preserved medallions of the Mother of God, St. Cyril of Turov, Abraham of Smolensk and St. Barbara are inserted in the cross. Medallions with the images of Jesus Christ and St. John are to be made in the same style and to make them look old. The medallions are cut into a wooden base and fixed to the cross by special decorative embedded parts. The inscriptions that indicate where a certain saint is depicted, can be finely coined on the embedded parts.

The central image of Jesus Christ is decorated with four diverging rays of gold with silver plates, which form a symbolic image of the four-pointed cross of Korsun, which belongs to the ancient Byzantine type of sanctuary crosses and was widely spread in the Eastern Christian world in the twelfth and thirteenth centuries. There are inscriptions referring to the Savior carved in silver onlays, buried in wood. The rectangular gold plates are engraved with a quote from the work of St. Cyril of Turov "The Word on the Deposition of the Body of Christ from the Cross".

Four faceted hemispherical gemstones placed at the cross, in addition to adornment, symbolize the four elements and the plenitude of the universe, consecrated by the Cross of Christ. Red is fire and heavenly lights, blue is water, white is air, green is earth and vegetation. Precious stones, alternating with medallions depicting saints, represent the image of precious pearls that are the souls of saints in the Kingdom of Heaven.

Four diamond-shaped brown plates, made of dark stone and located on the sides of the horizontal bar and two at the base of the cross, indicate the nails that nailed the body of Jesus Christ to the Cross.

There are golden acanthus leaves at the base of the cross, which symbolize the Blossoming Cross and the Tree of Life. There is a precious red gem above this floral ornament and under the symbolic nails. It represents a drop of the Blood of Christ, which made the suffering of the Cross a symbol of life and resurrection. Also, the theme of the Resurrection and the Blossoming Cross is supported by floral ornament in the form of chasing on the sides of the golden box.

The back side of the cross remains blank. A plate with engraving that contains information about the product can be fixed in its lower part.
© Prohram Architectural Bureau and Workshop. 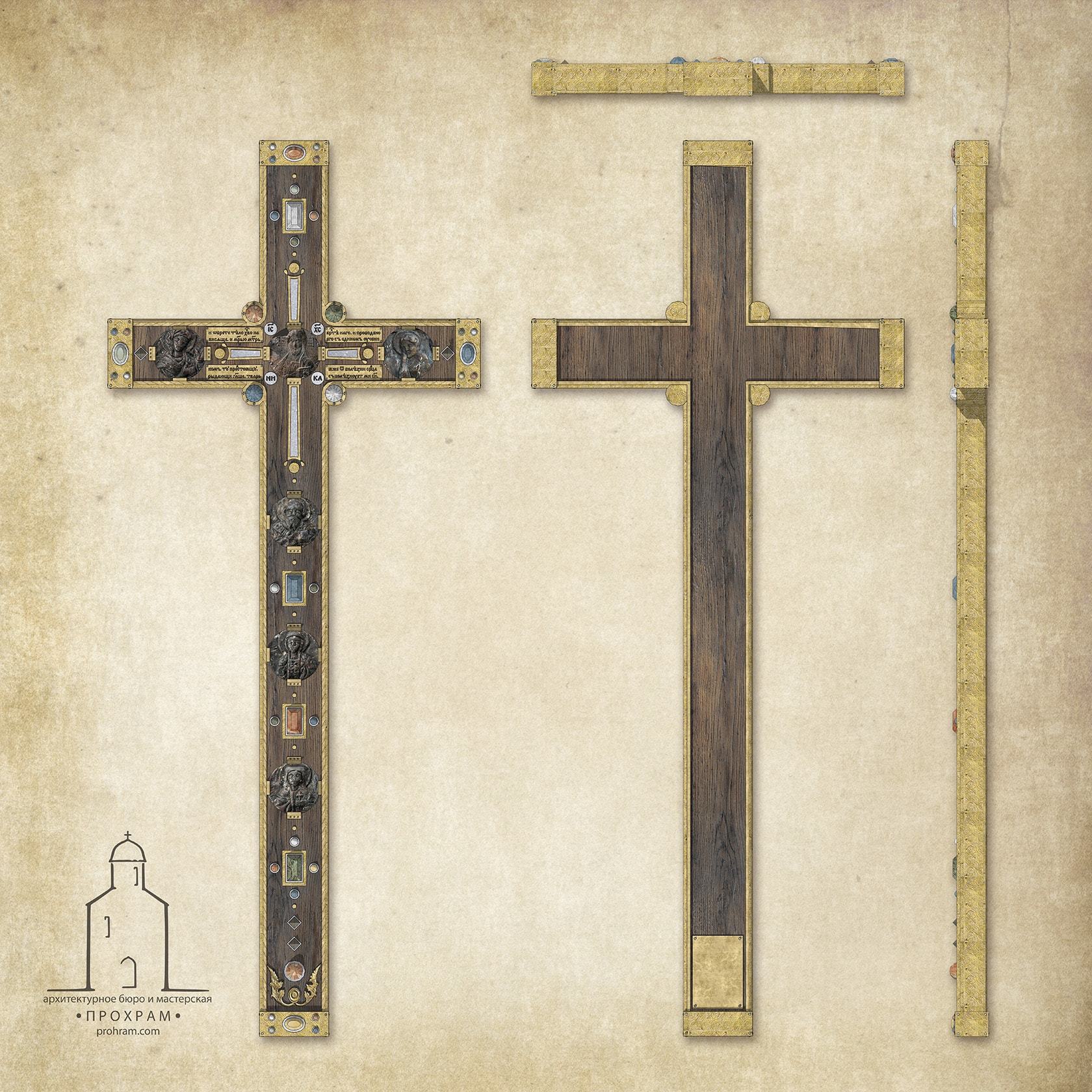 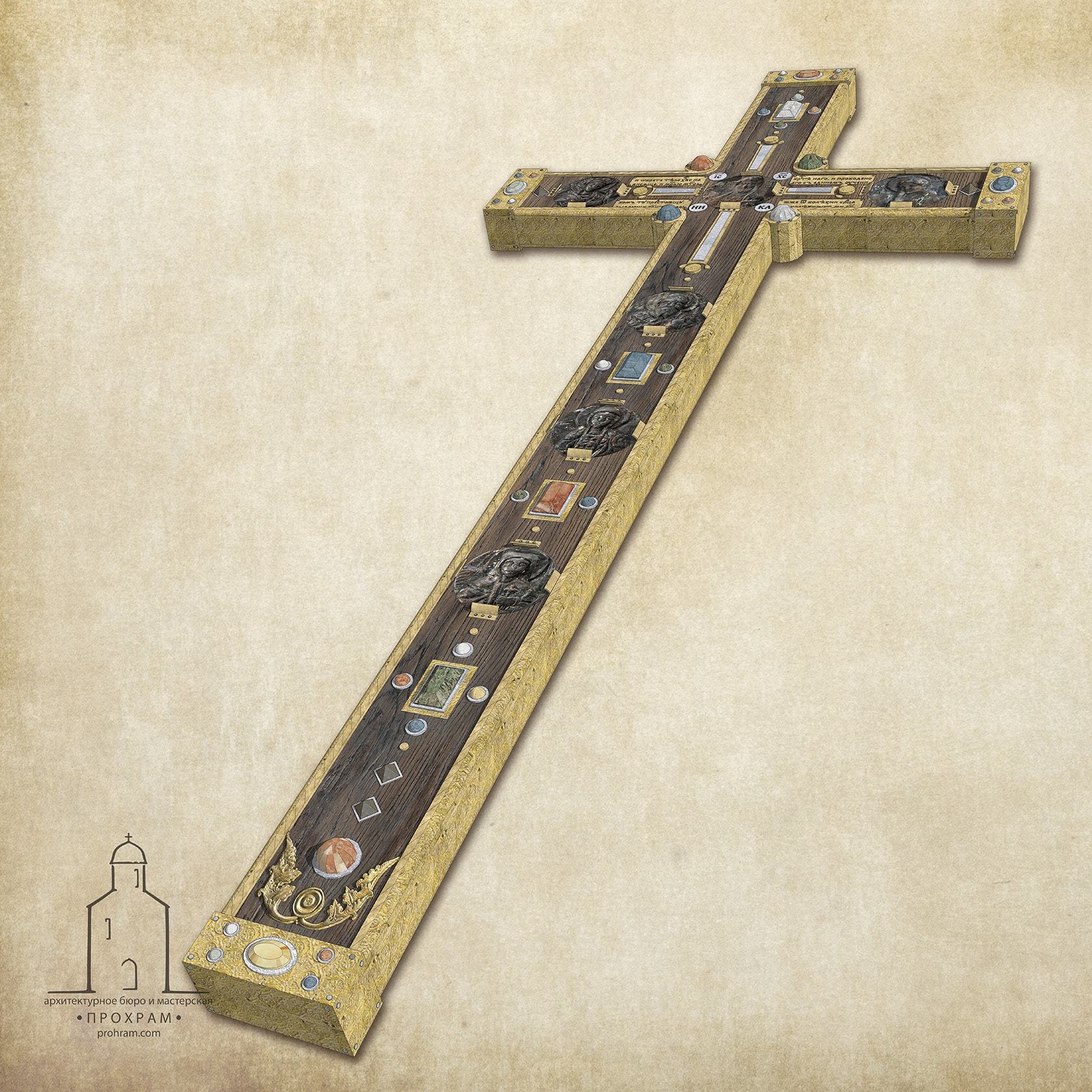 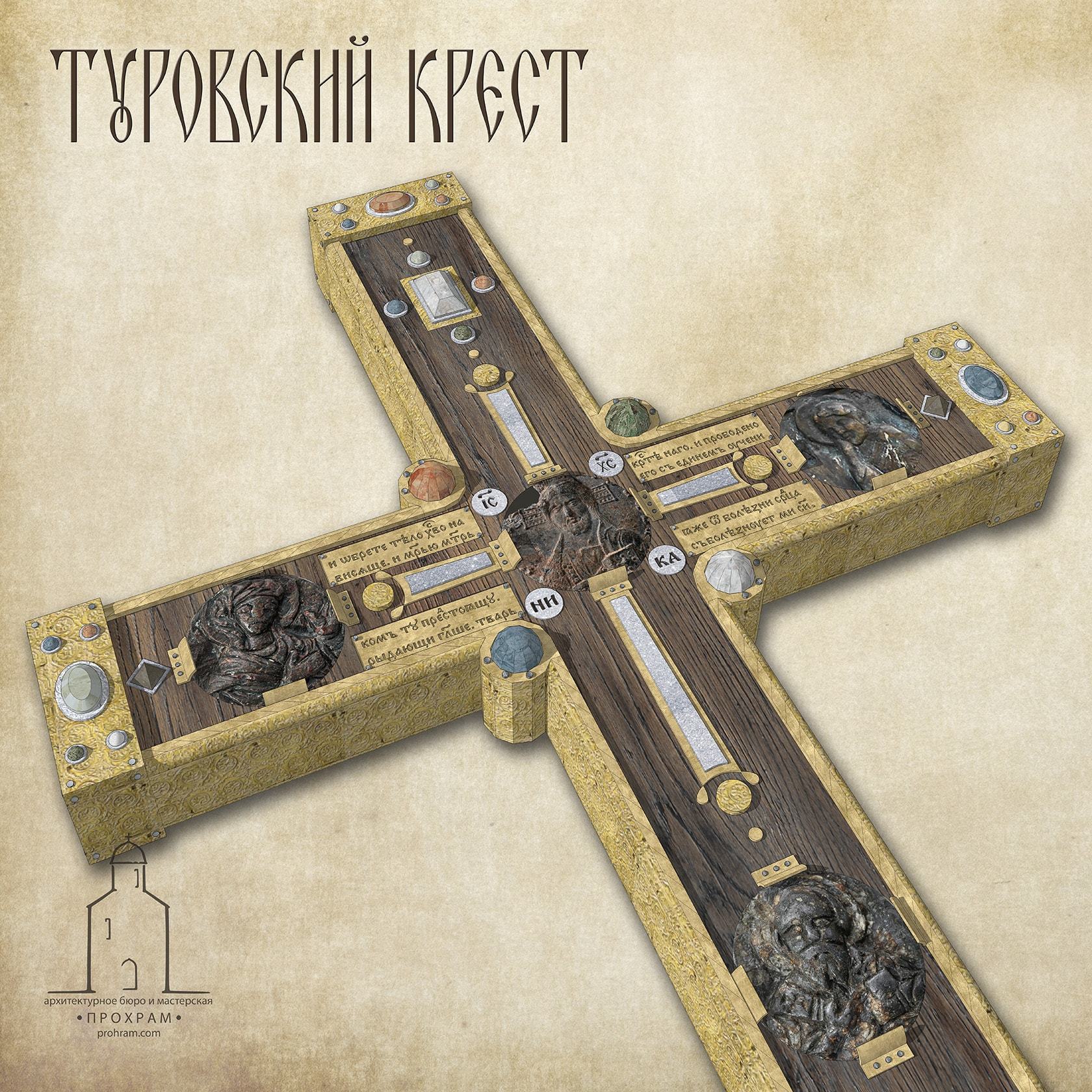