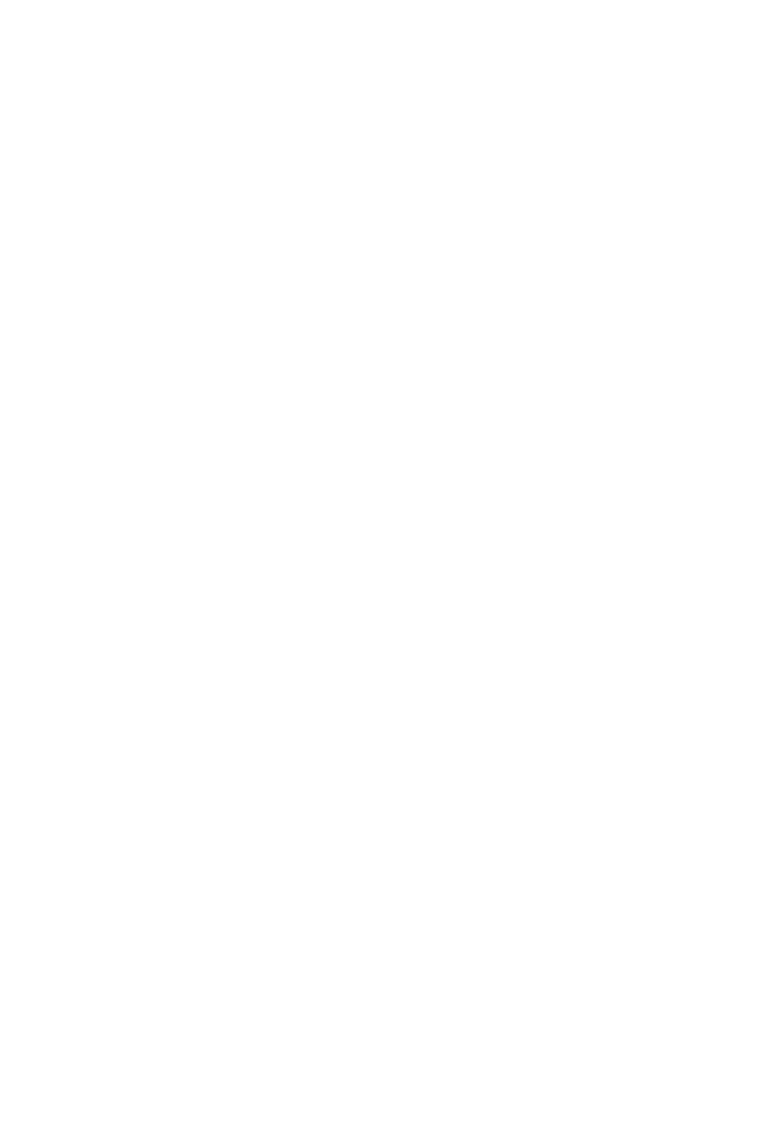 The icon must live because it represents eternal life. It is not just a piece of art or interior design: it depicts the Savior, the Mother of God, the saints or this or that Gospel story. They are not just depicted, but rather are revealed through the iconographic images. Even the most decrepit icon, with a centuries-old touch of history in the form of large damages or cracks, with crumbling ground, carries in itself the presence of Divine eternity in iconography.

The task of restorers is to preserve these images, to bring them to their proper appearance, not only as artistic and historical treasures, but also as objects of the Church that convey her spirit. Today, a lot of new icons are being painted, and not as much attention is paid to keeping them in proper condition and preserving them from the destruction of old icons as required. In addition, many old icons require restoration and renovation of the images... Museums restore ancient paintings and preserve them in proper conditions, but mostly as objects of cultural heritage. Today, the not-so-numerous church museums are trying to reach the top quality level. However, old icons in churches and houses of believers often fall into unprofessional hands, and instead of preserving the iconographic image, they are sometimes damaged.

The specialists of the Prohram Studio always start working on each painting with great attention and reverence. Before starting the work, the restorer studies the board with the painting as to its authorship, technique, degree of preservation, temporal layers, and damage to the board itself. They determine the time when the icon was painted and the school of painting and then pick up similar samples of the corresponding period. The restorers make a step-by-step plan of the restoration work. All stages from studying to practical actions are marked in special diaries and accompanied by photographing. You can read more about the work stages in the Process tab.

It should be noted that not only old images, but also icons that are more than a few decades old require careful care, preventive treatment and sometimes even small-scale restoration.

Restoration of an iconographic image is at the same time not just the work with the object of church art, but also a symbol of preservation, continuity and restoration of both lost sacred objects and the authentic Orthodox spirit of the Church, which is passed on from one century to another. The respect for the icons is the criterion of our Christian conscience. 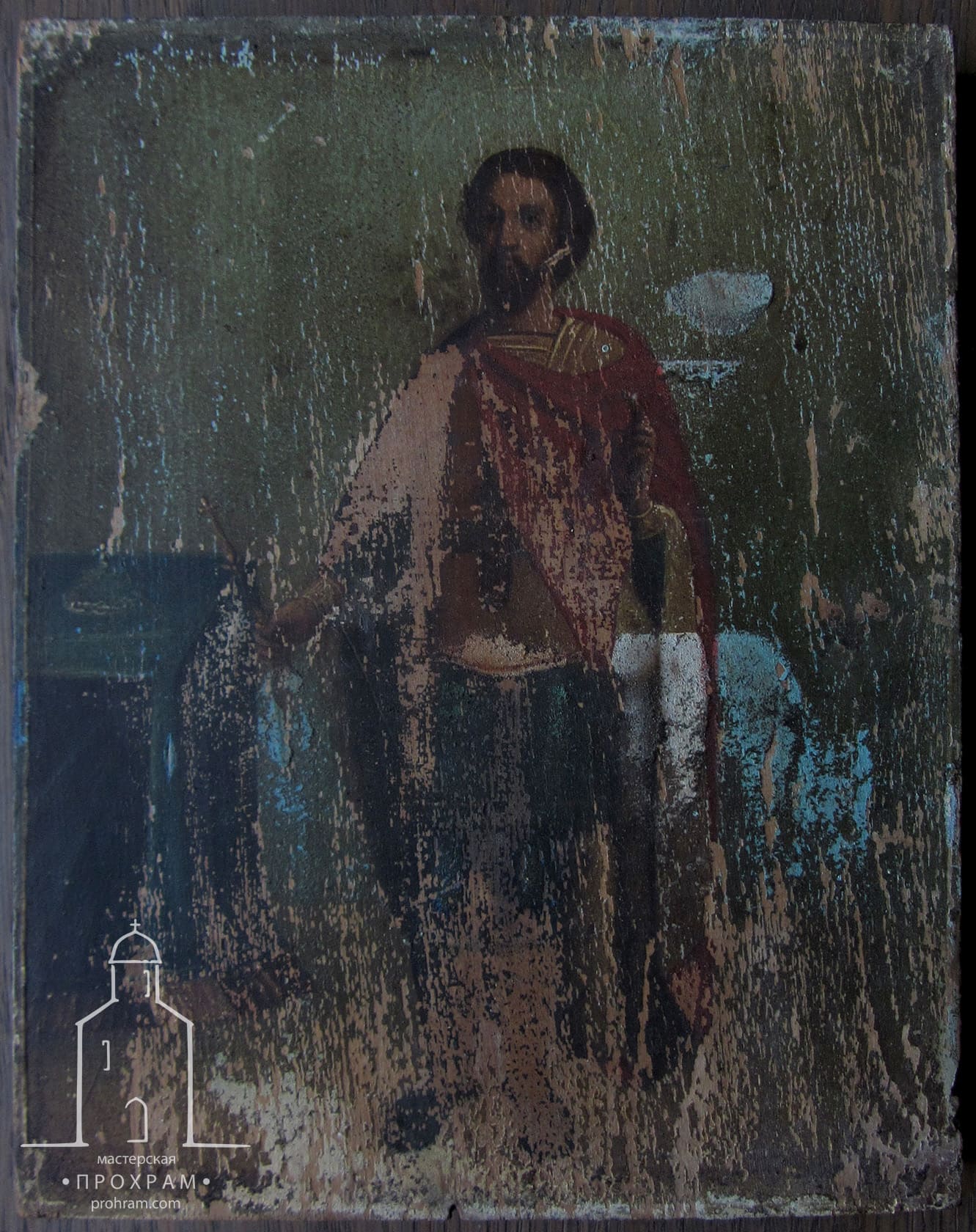 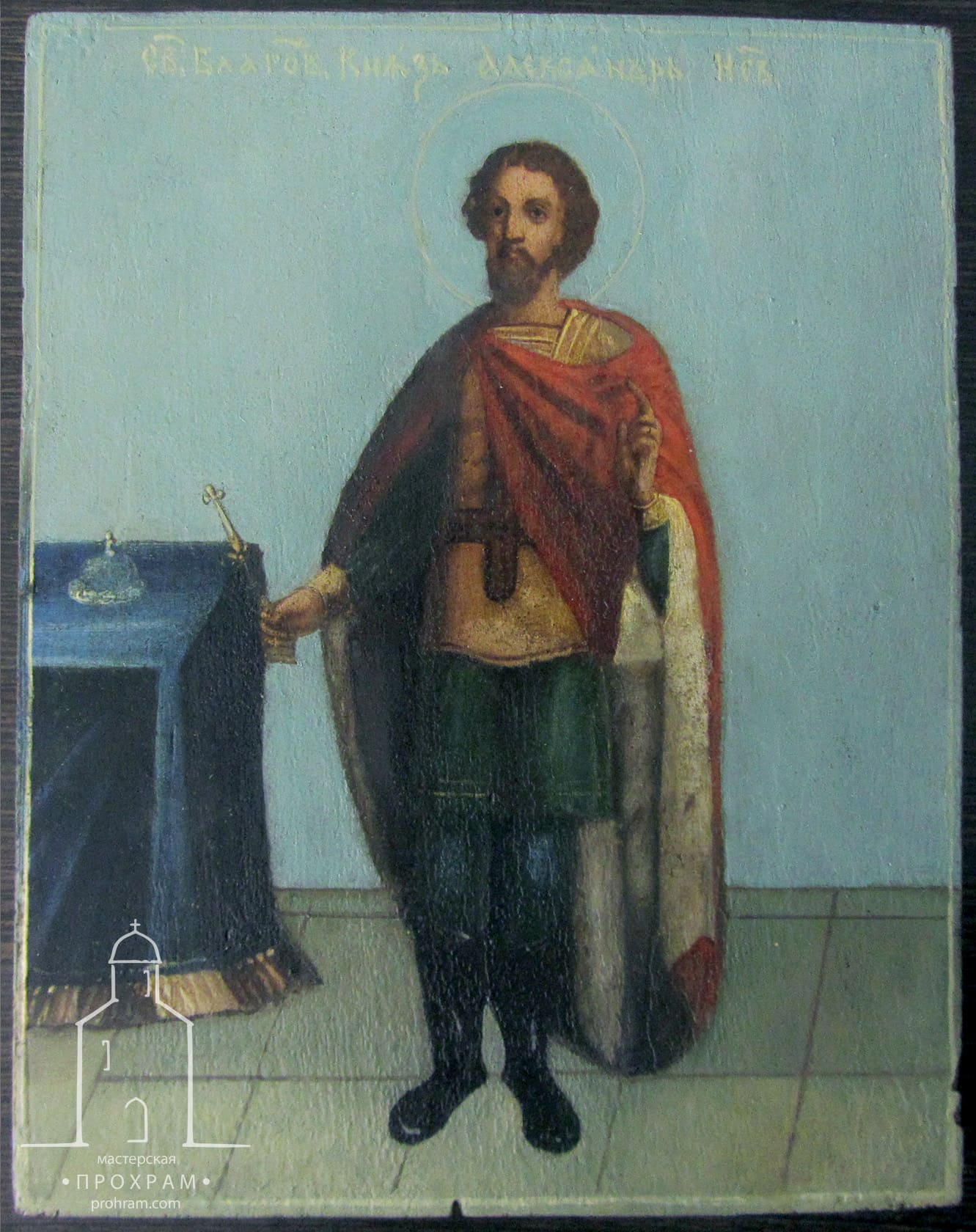 Icon of St. Nicholas the Wonderworker, northern school of painting, the 19th century. 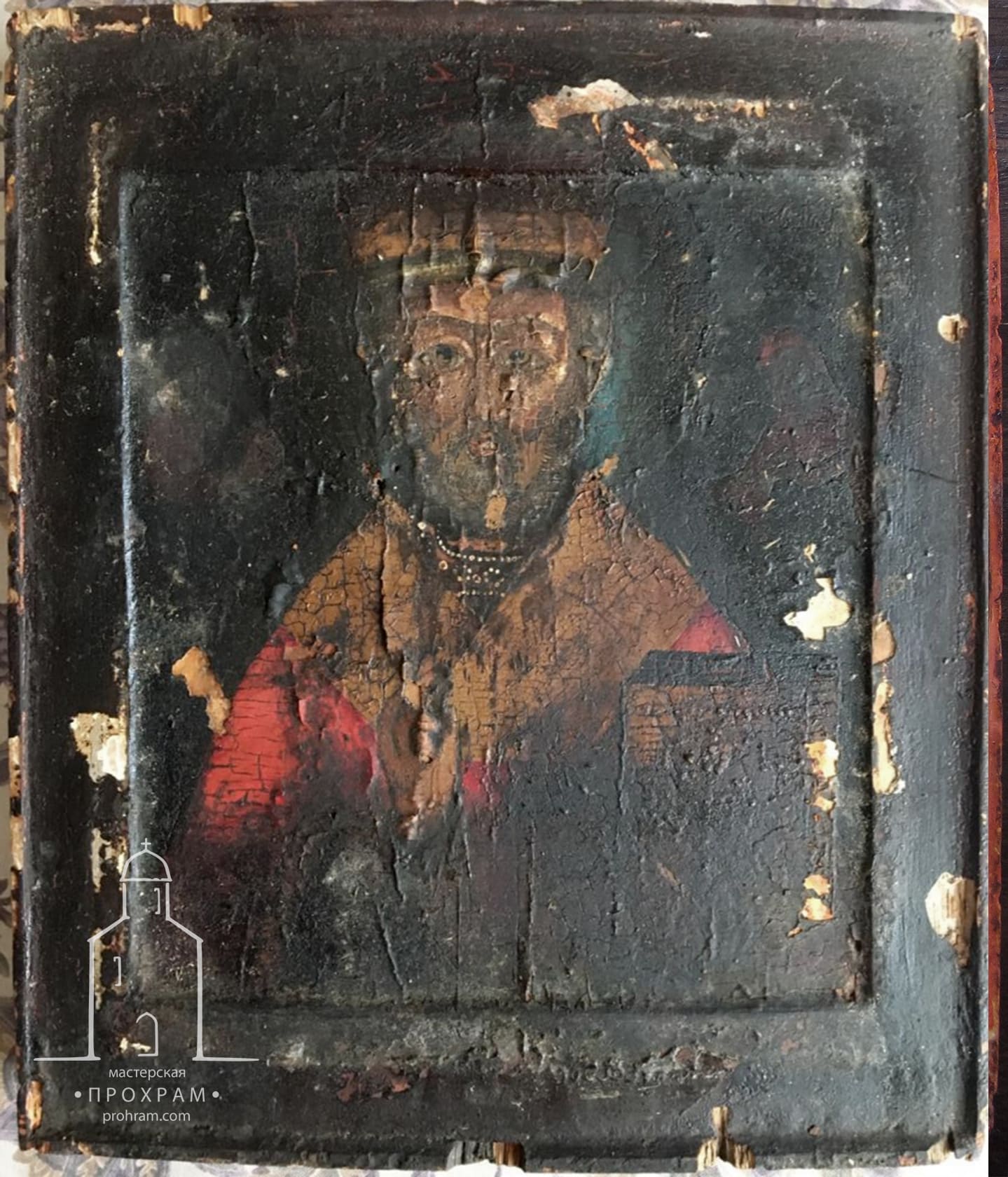 Bug holes, strong charring, loss of gesso and primer, soot and remnants of the old varnish. Later layer of paint. Damage to wood and paints.

Fragment of the initial condition and milestones of work:
Result: 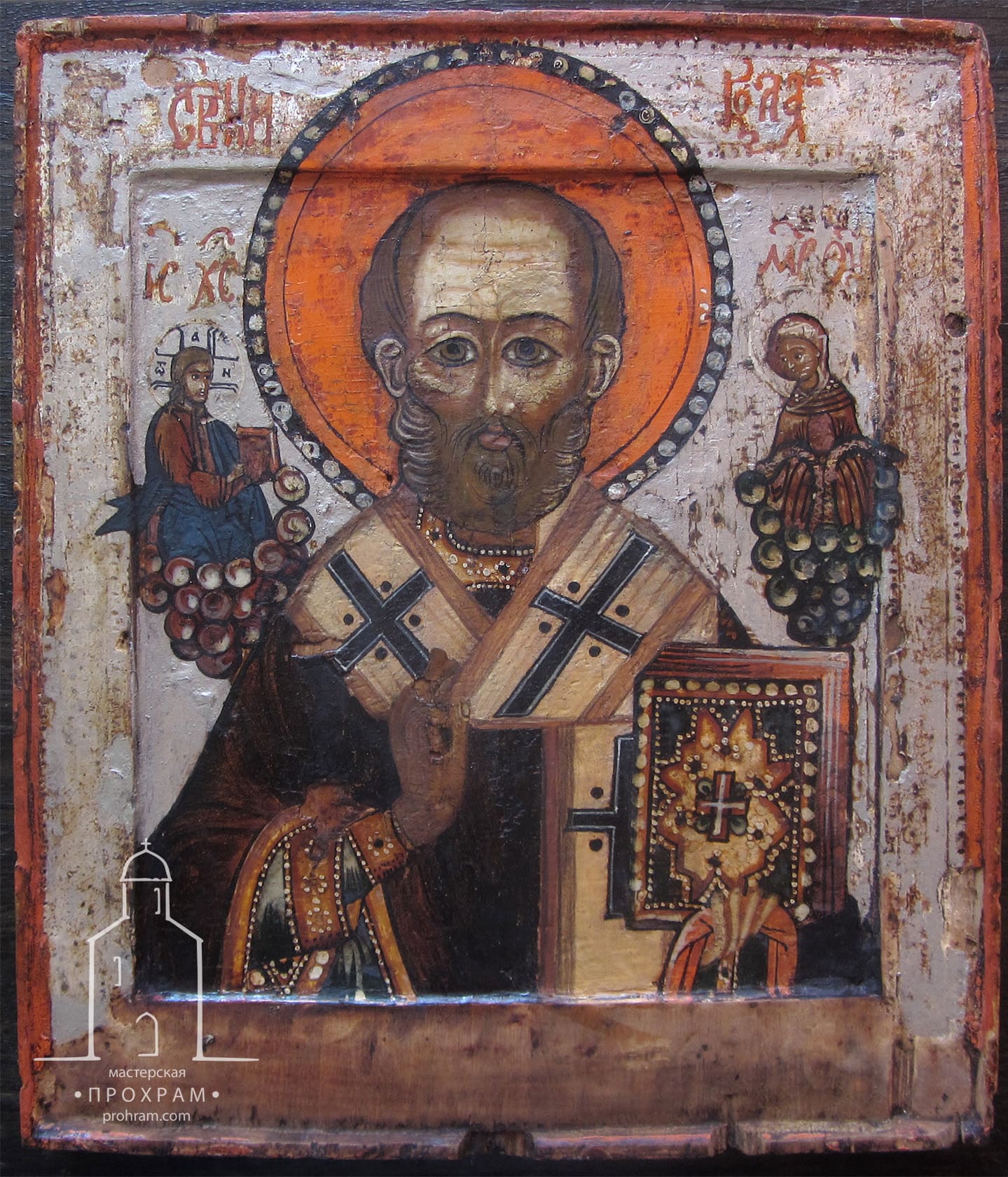 Icon of the Dormition of the Blessed Virgin Mary. mid-19th century. 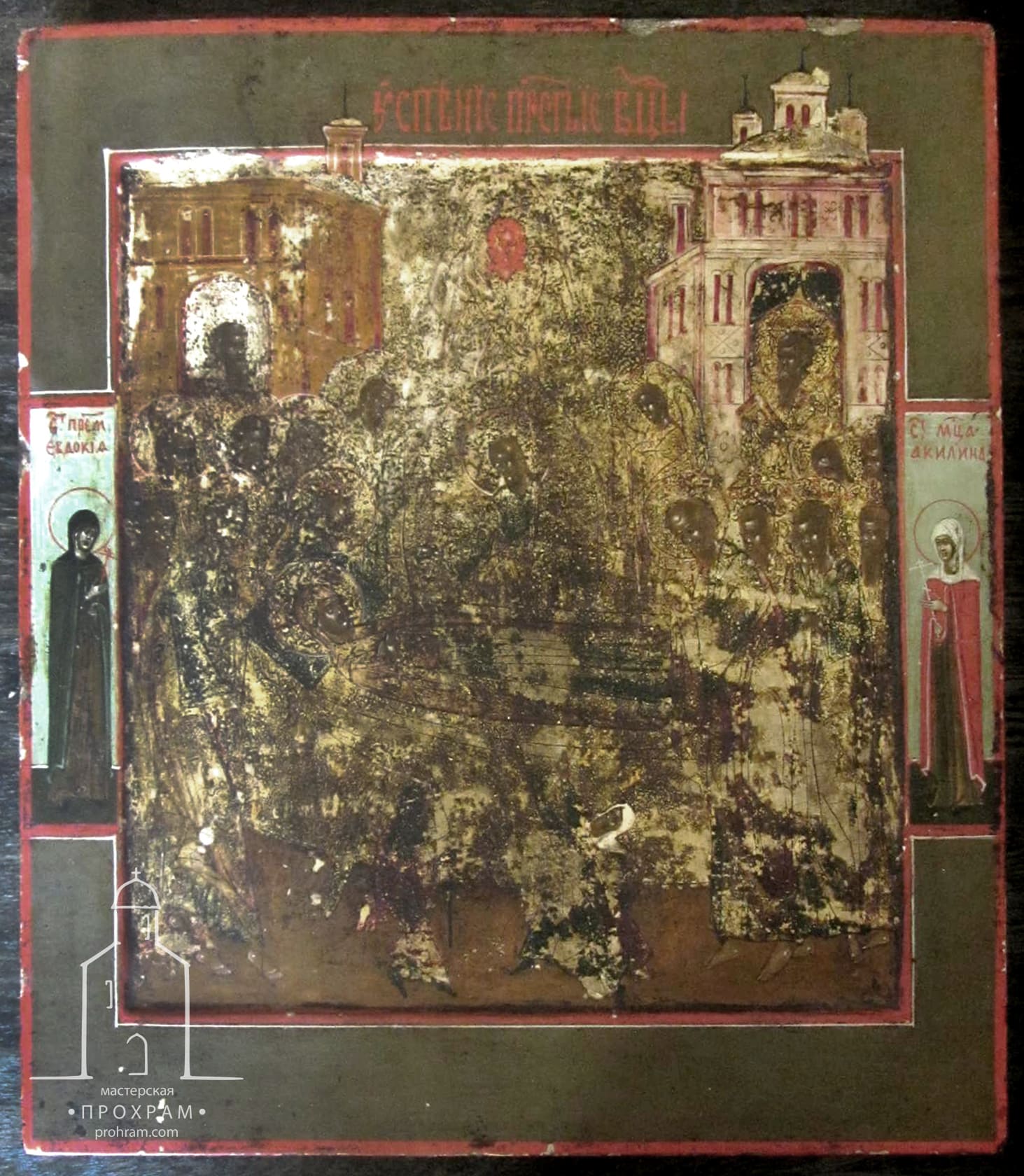 Bug holes, charring, loss of gesso and primer, soot and remnants of the old varnish. Destruction of the gold and the paint layers. Presumably, the icon previously underwent a non-professional attempt at restoration.

Fragment of the initial condition and the milestones of the restoration work:
Result: 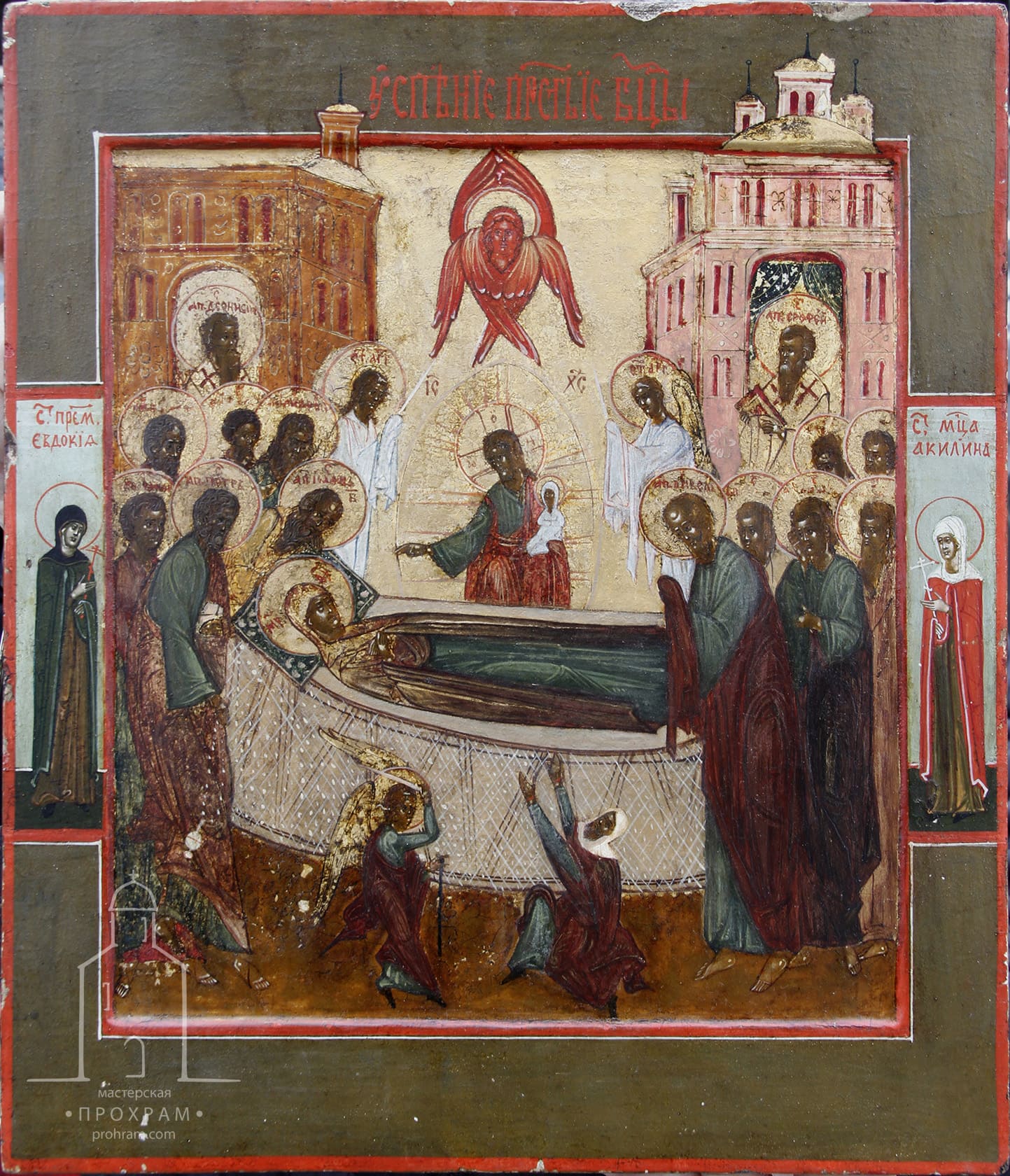 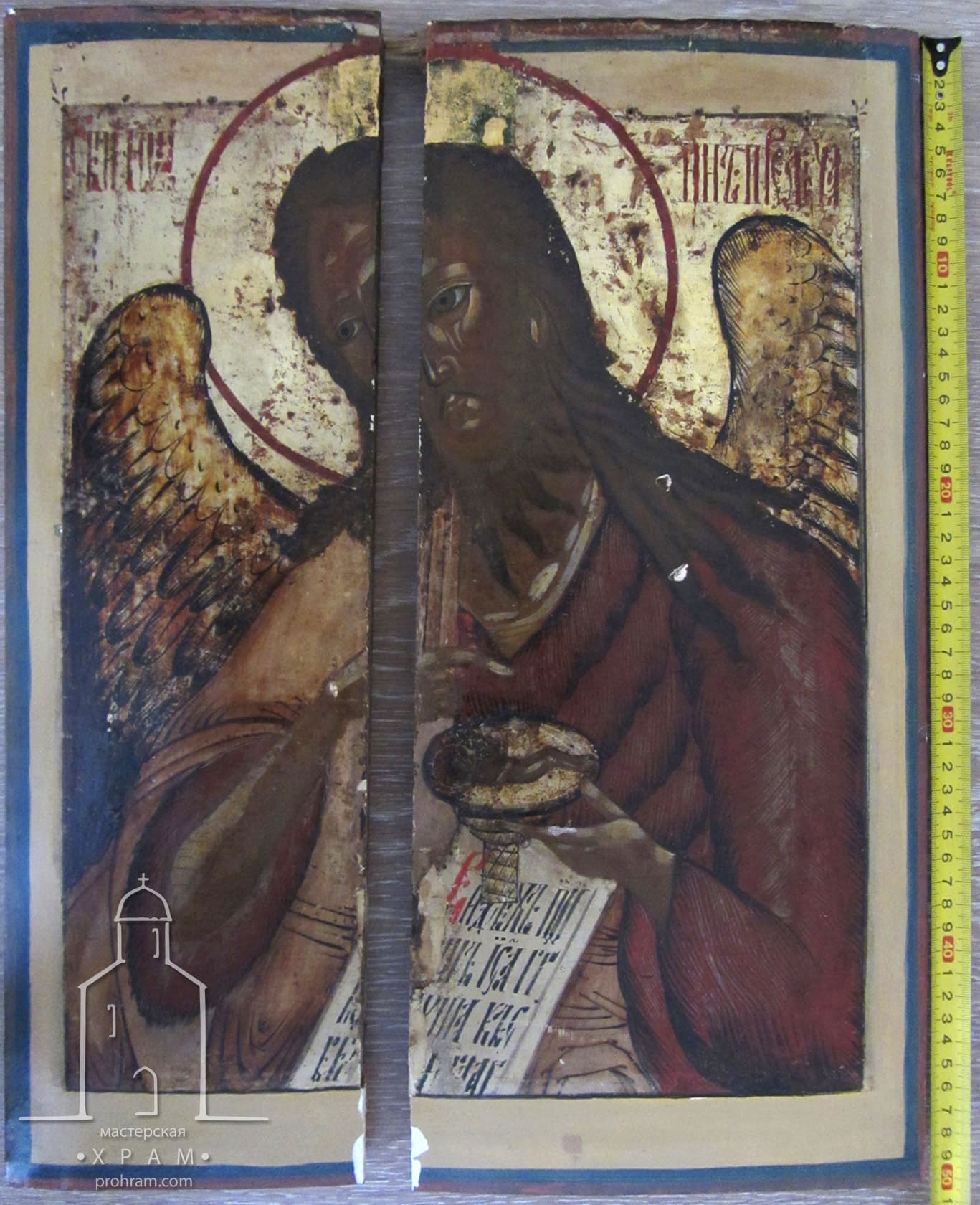 It was split into two parts. Damage of the paint layer, scratches. Incorrect insertion of a spline, which had to be replaced. The task was to keep it as close to the original appearance as possible. 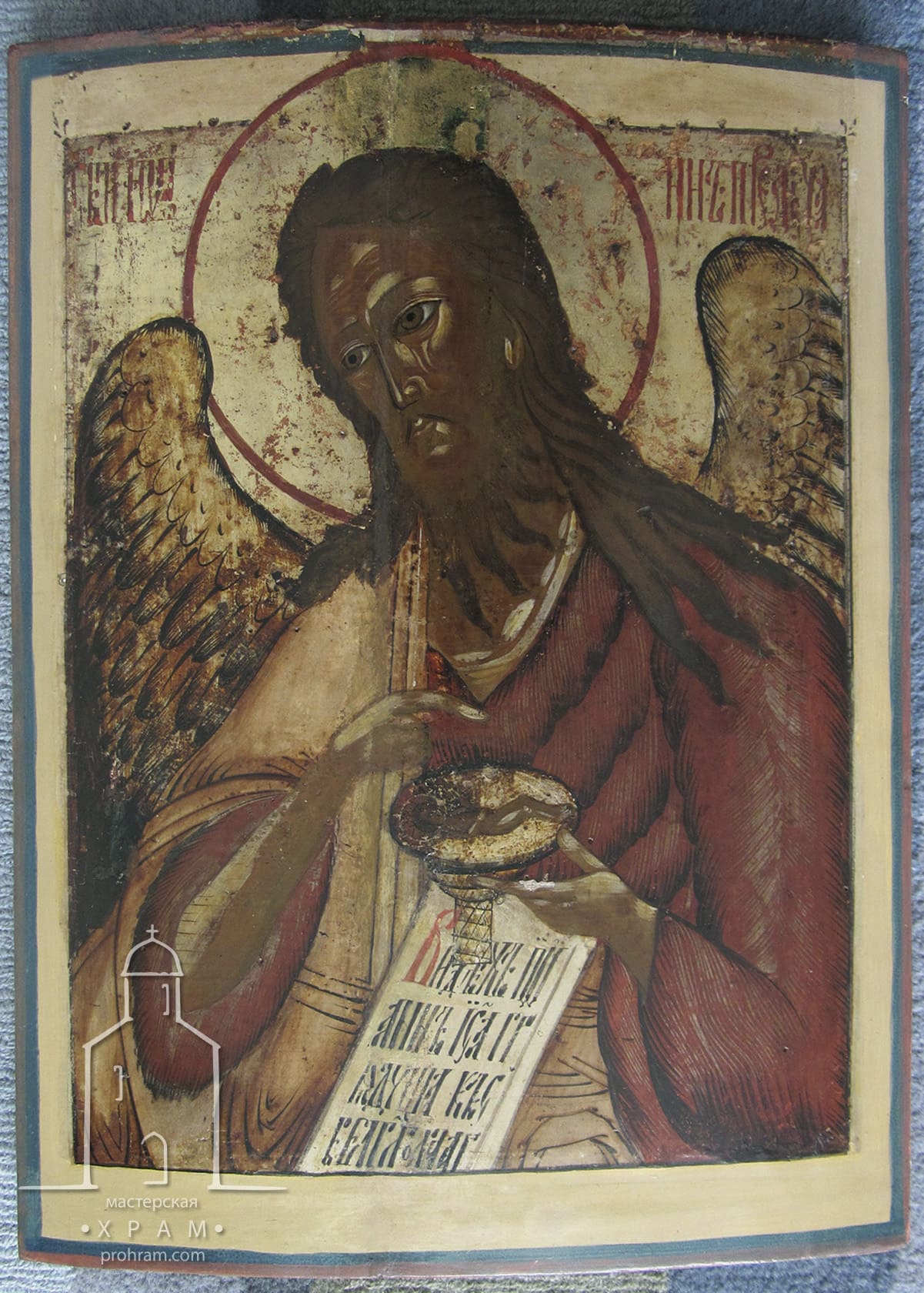 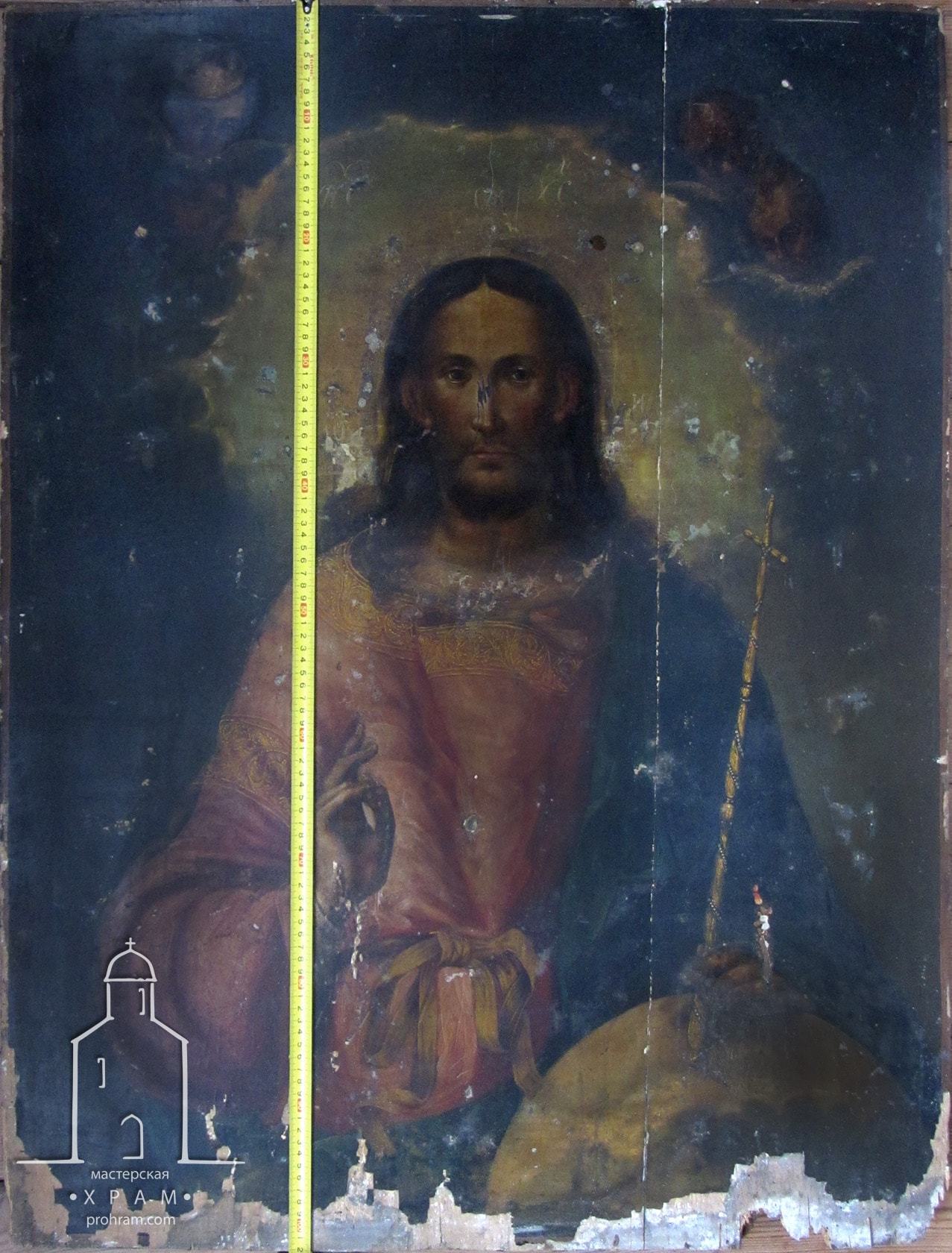 Damage of the paint layer, scratches, notches on the face, punctures from sharp objects, chippings, soot. Heavy damage and loss of parts of the board at the bottom, bug rot.

The condition of the icon before restoration, some stages of restoration and a fragment of the result (face):
Result: 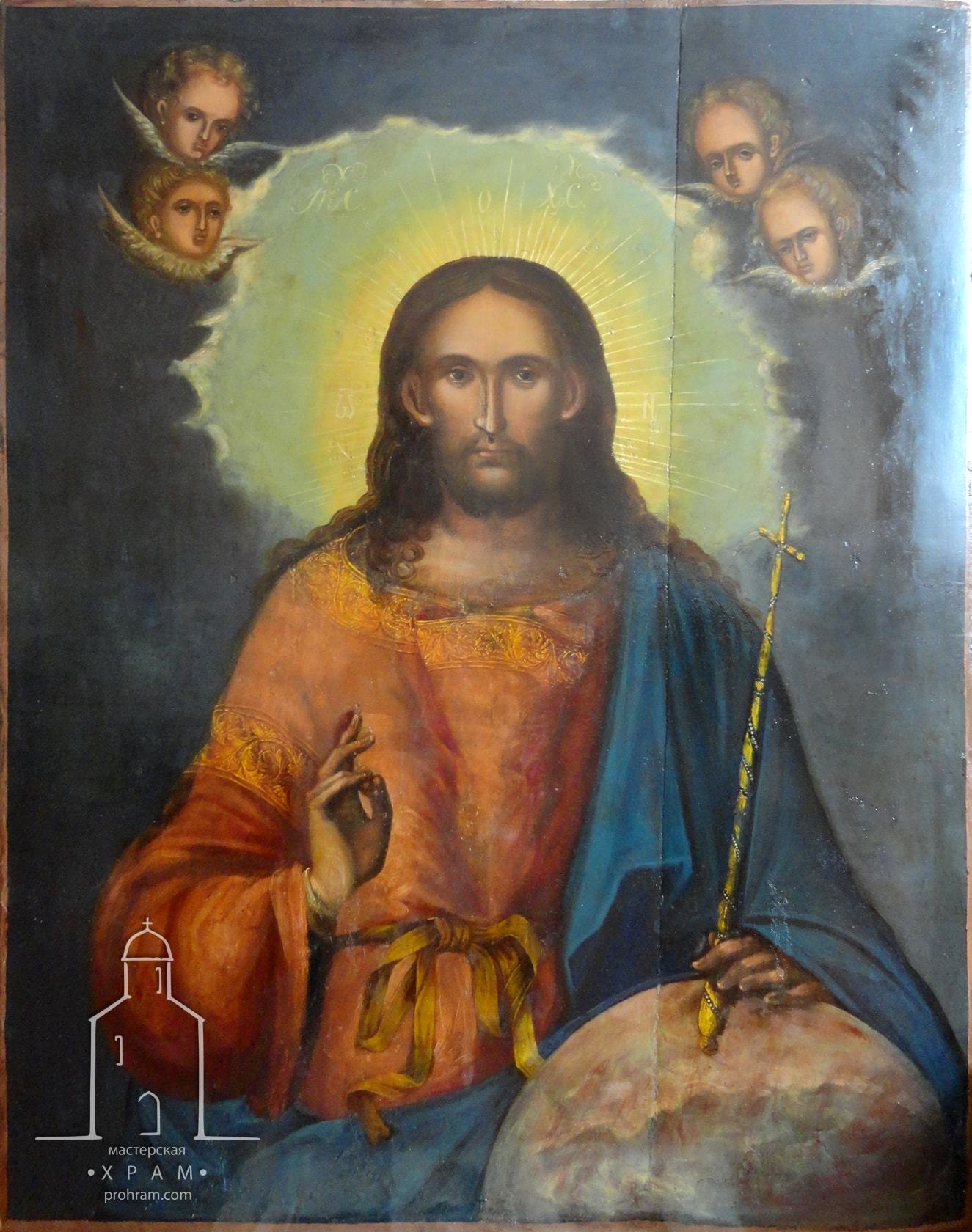 The icon of the Mother of God of Tikhvin, early 19th century. 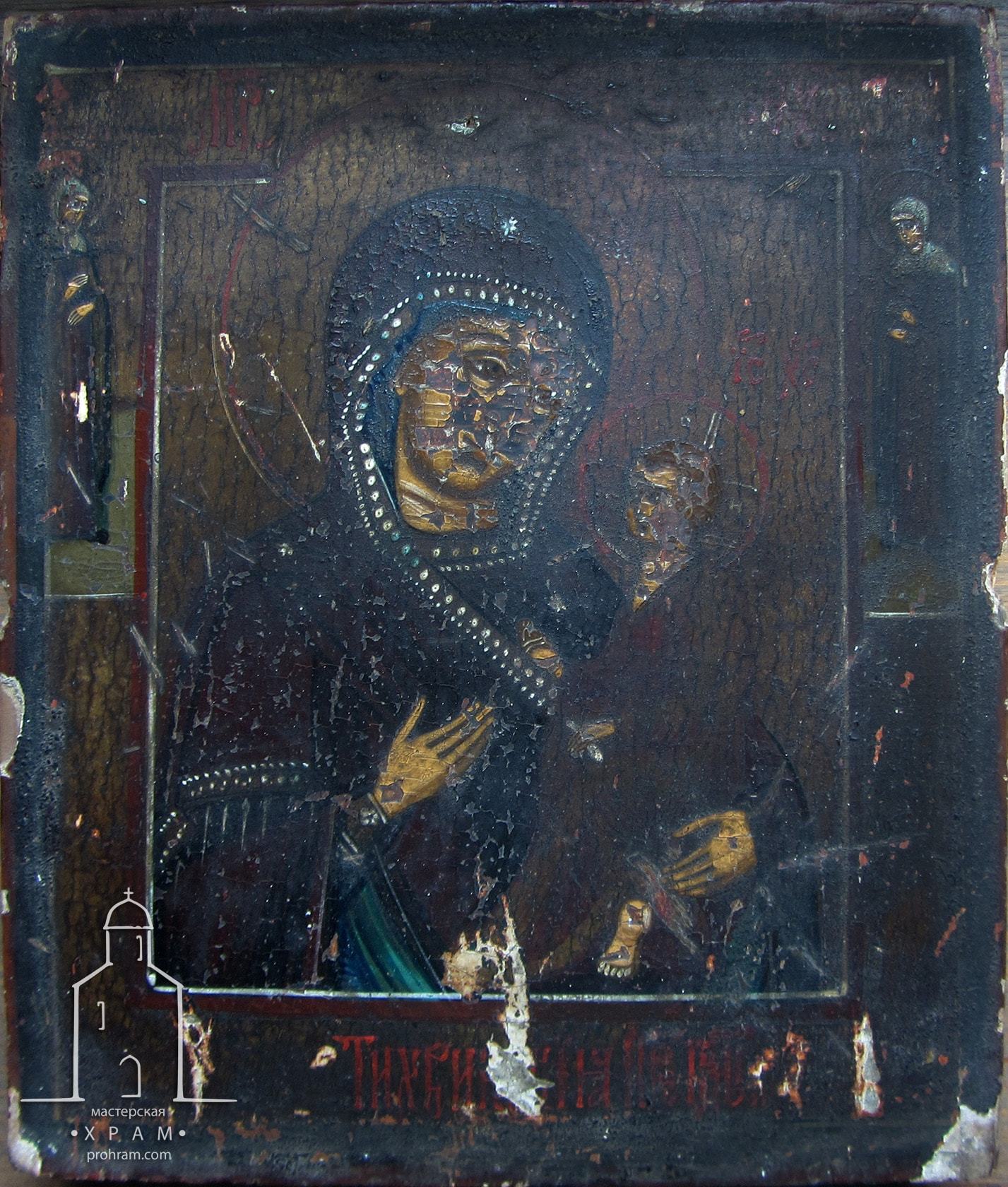 Heavy damage to the color layer, peeling and cracking, loss of gesso, scratches, wood peeling and chipping on the edges of the board, soot.

Initial condition (fragments), the icon in the process of restoration, filling lesions, coating with primer and gilding the frame (at the request of the customer):
Result: 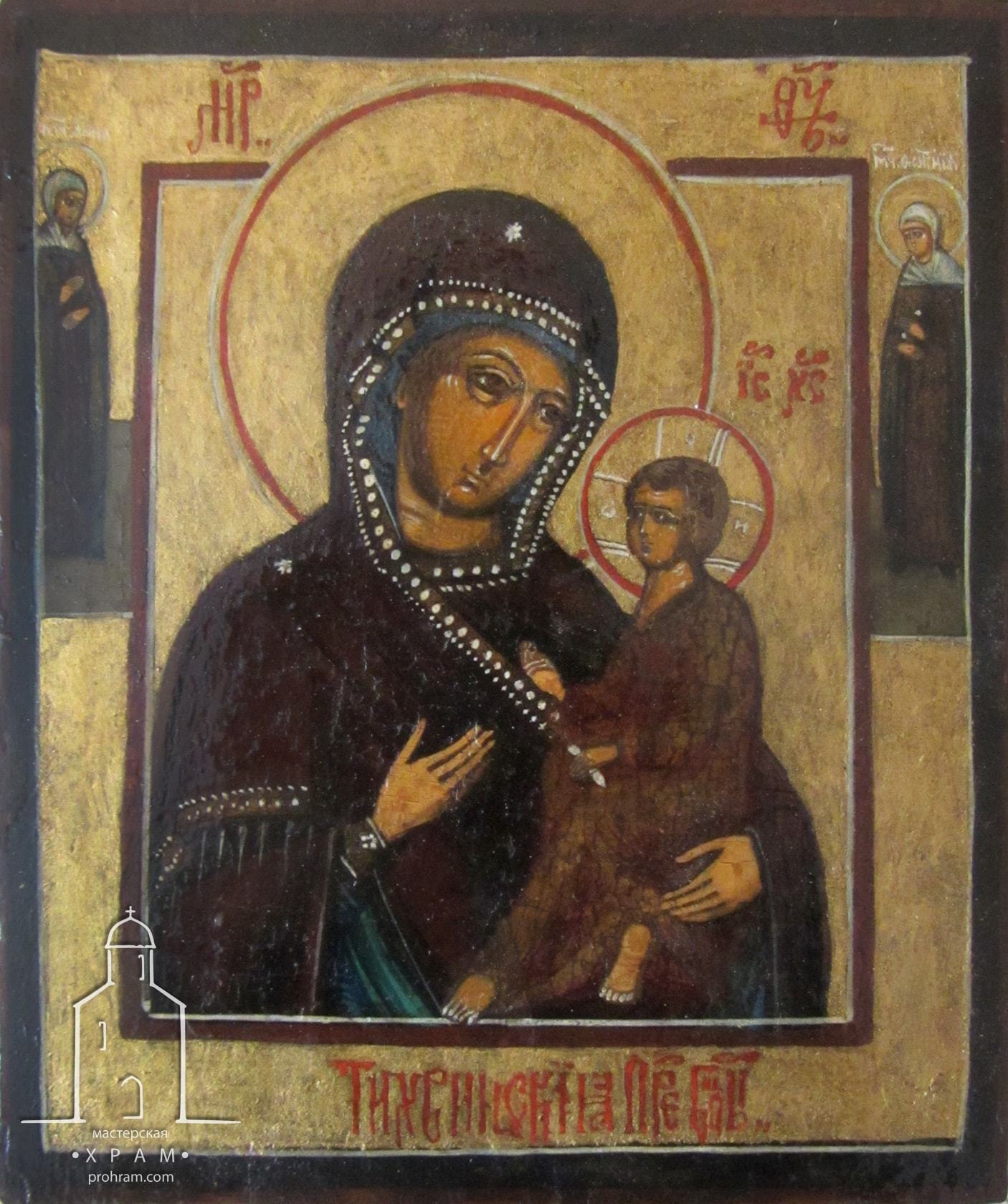 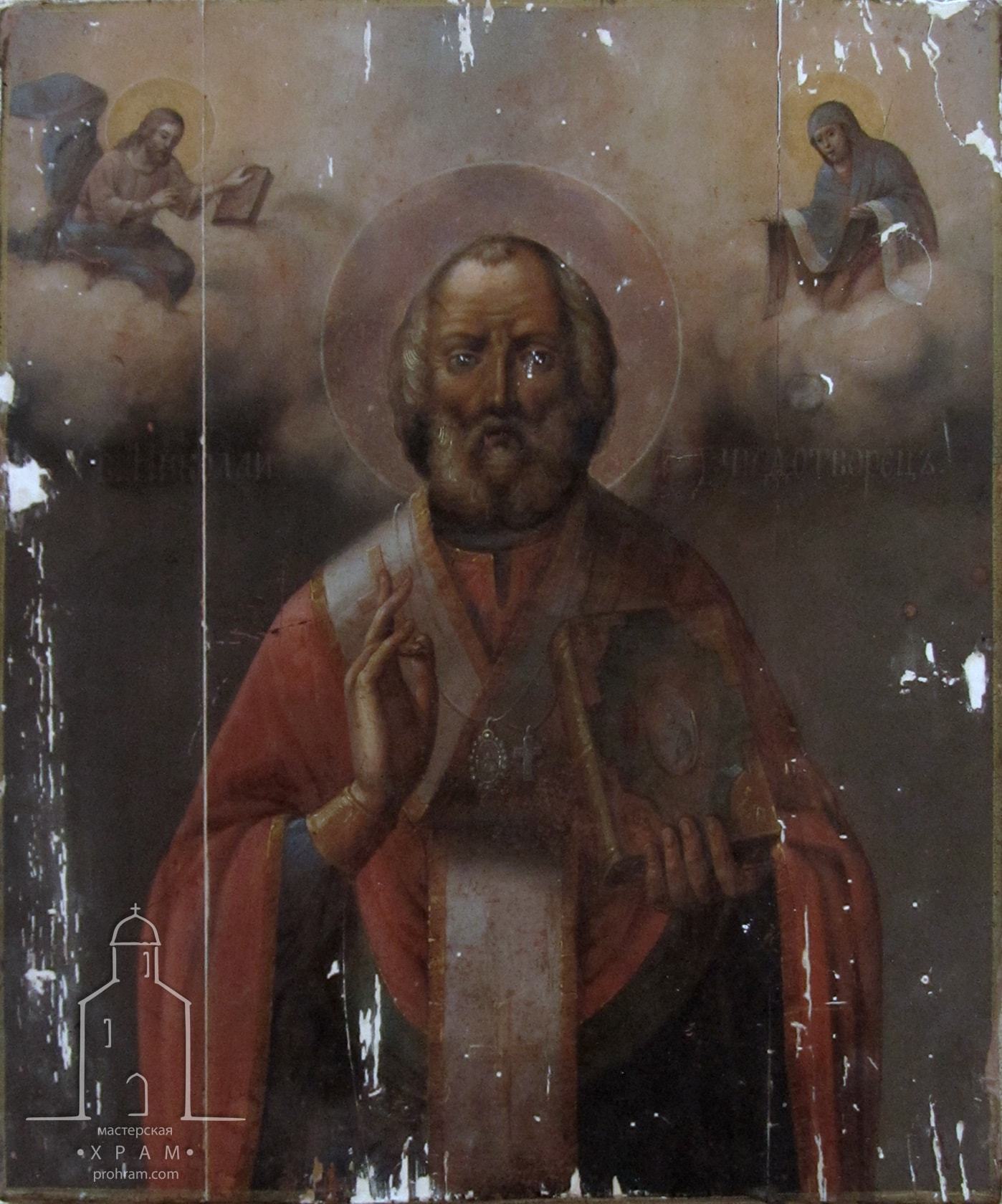 Damage of gesso and color layer, cracks, small losses of wood at the ends, scratches, soot. 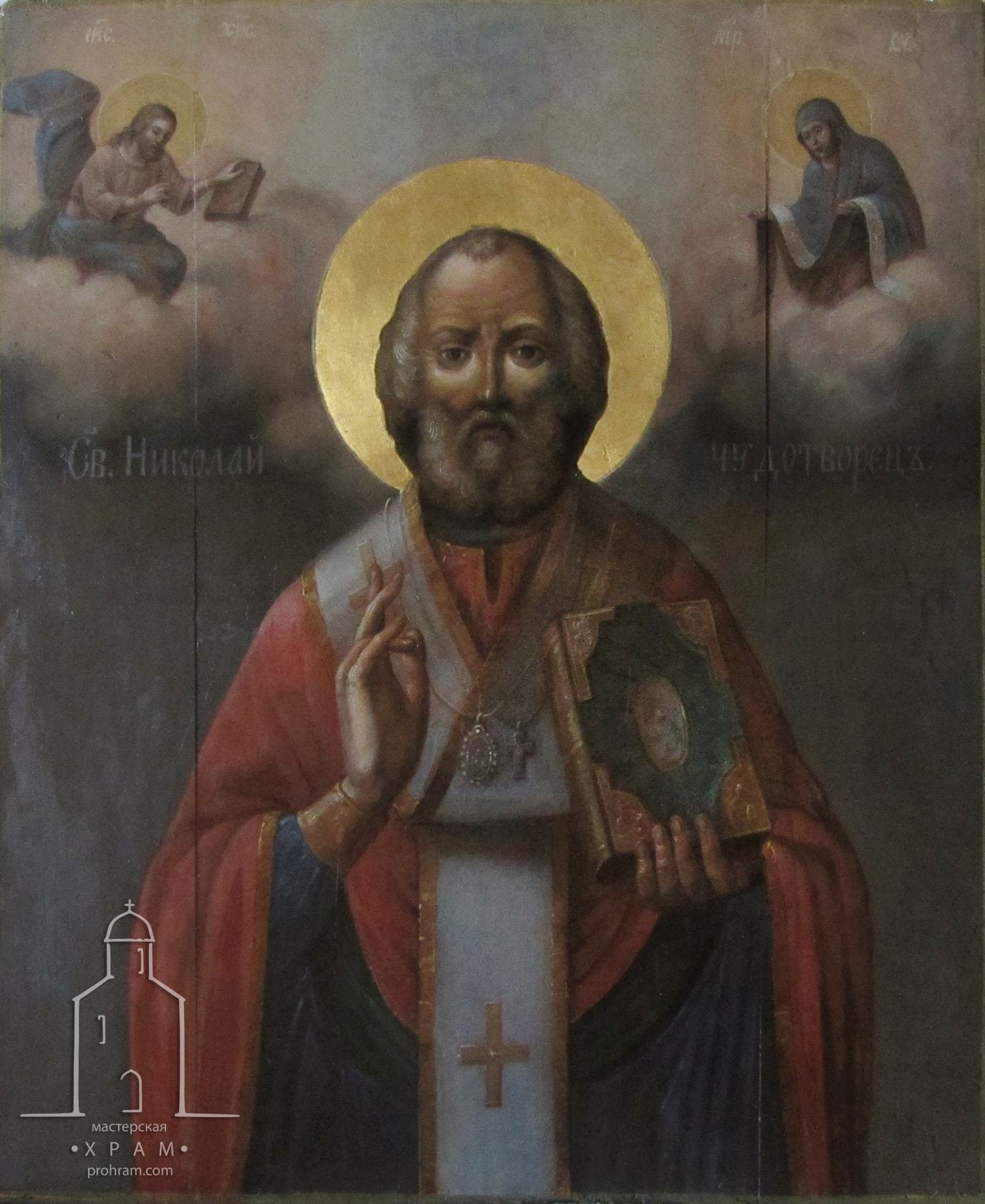 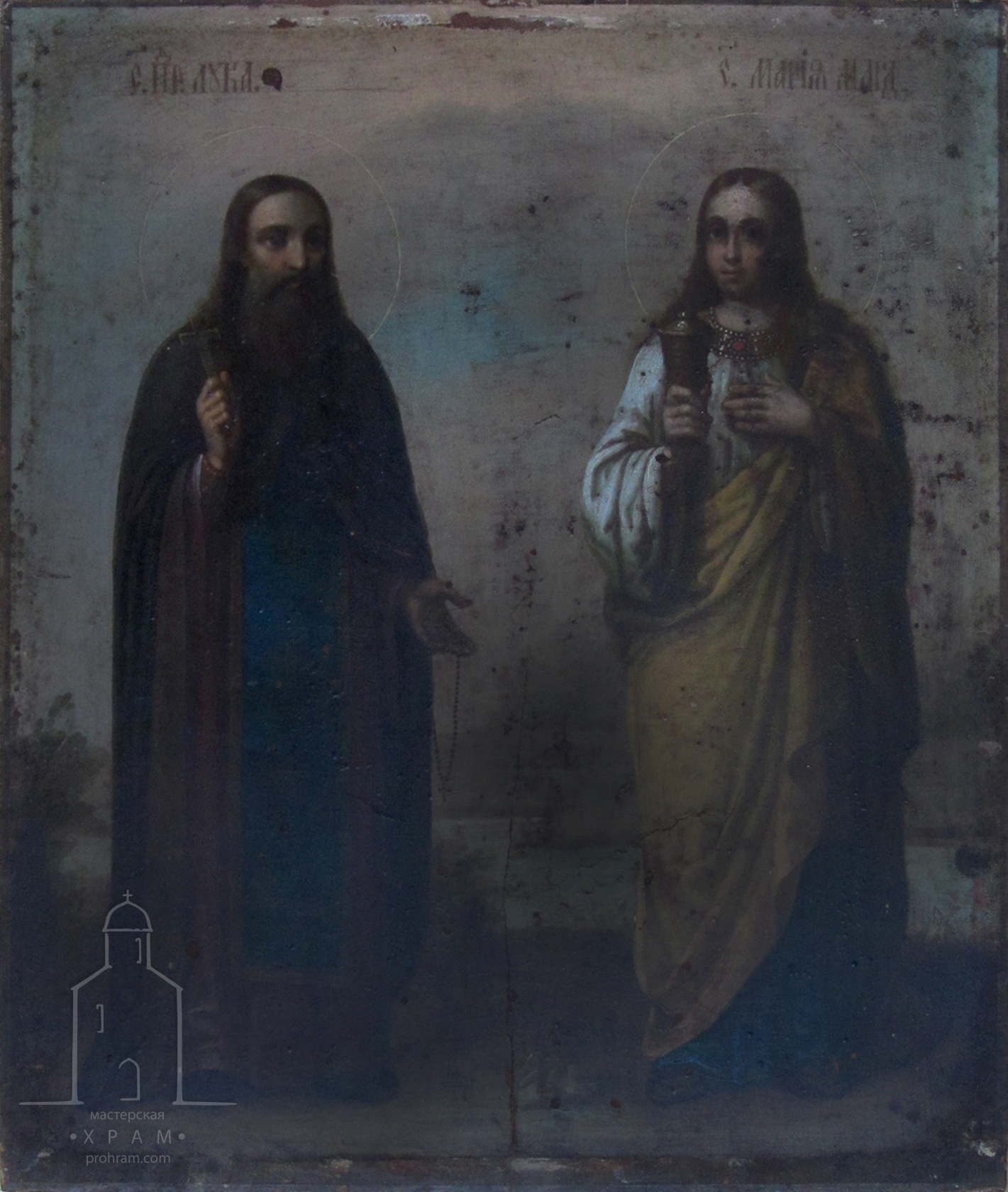 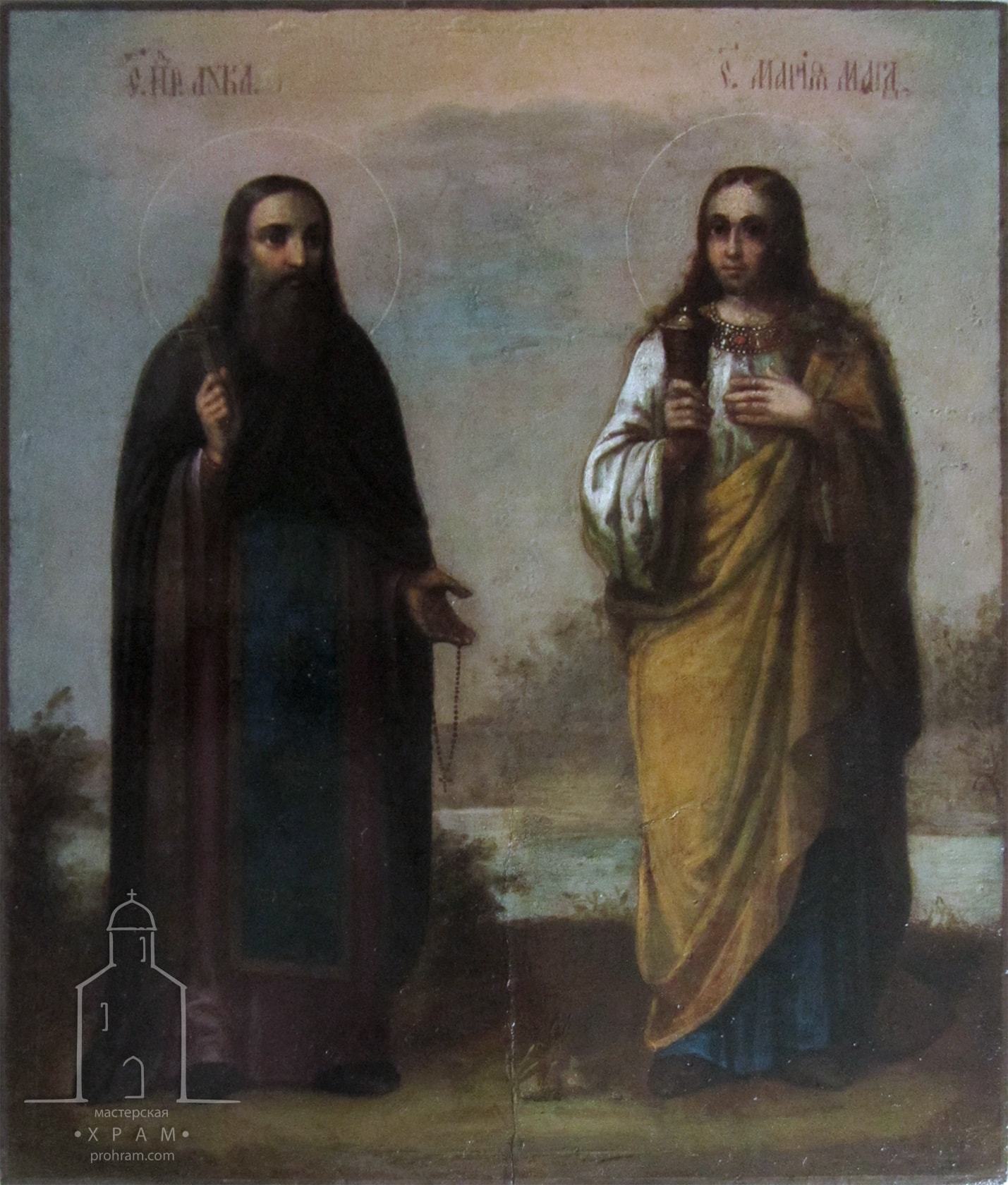 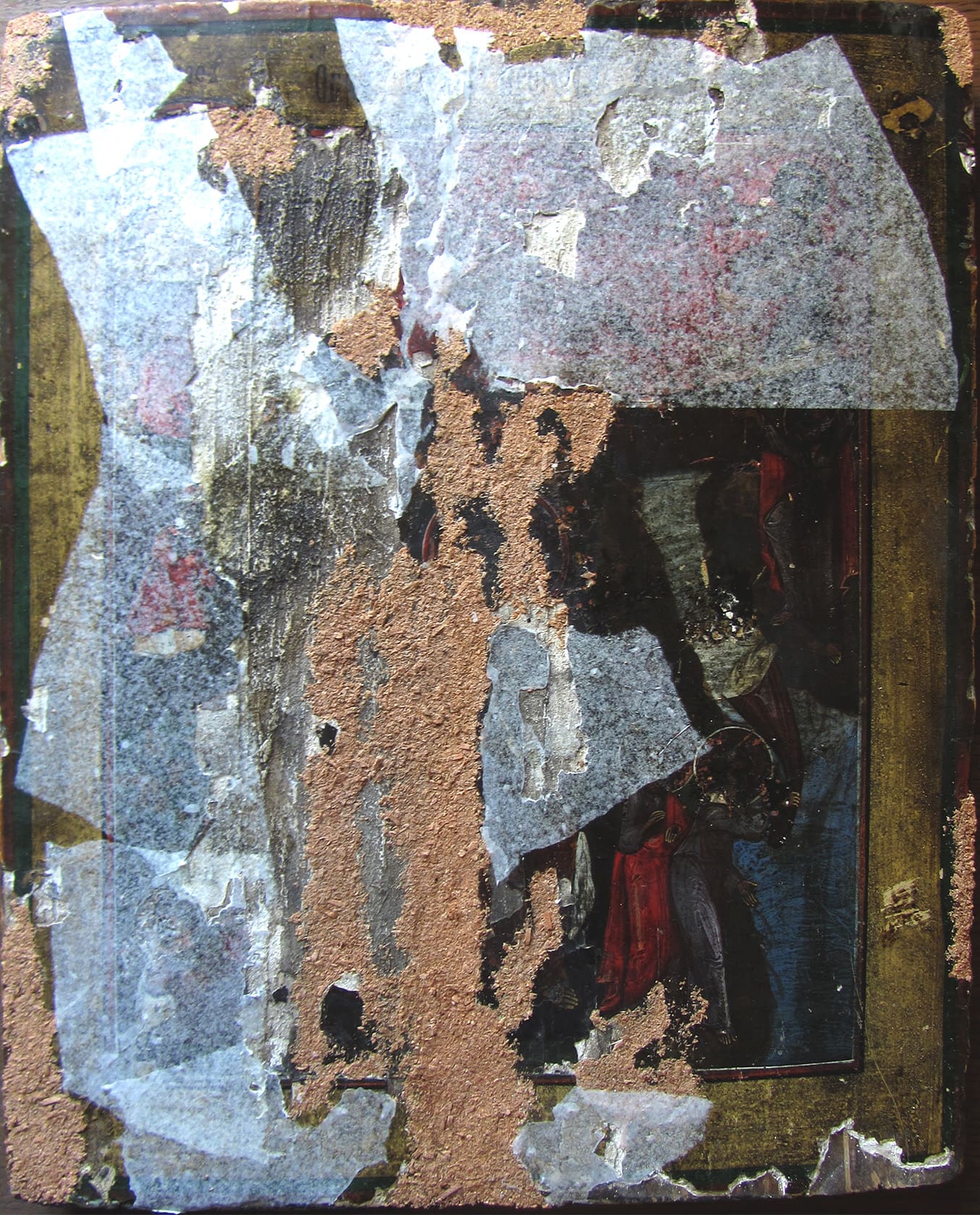 Severe damage to the wood, the loss of the color layer and gesso, soot, contamination, several deep holes, no back spline. The icon got to the restoration as shown in the photo. 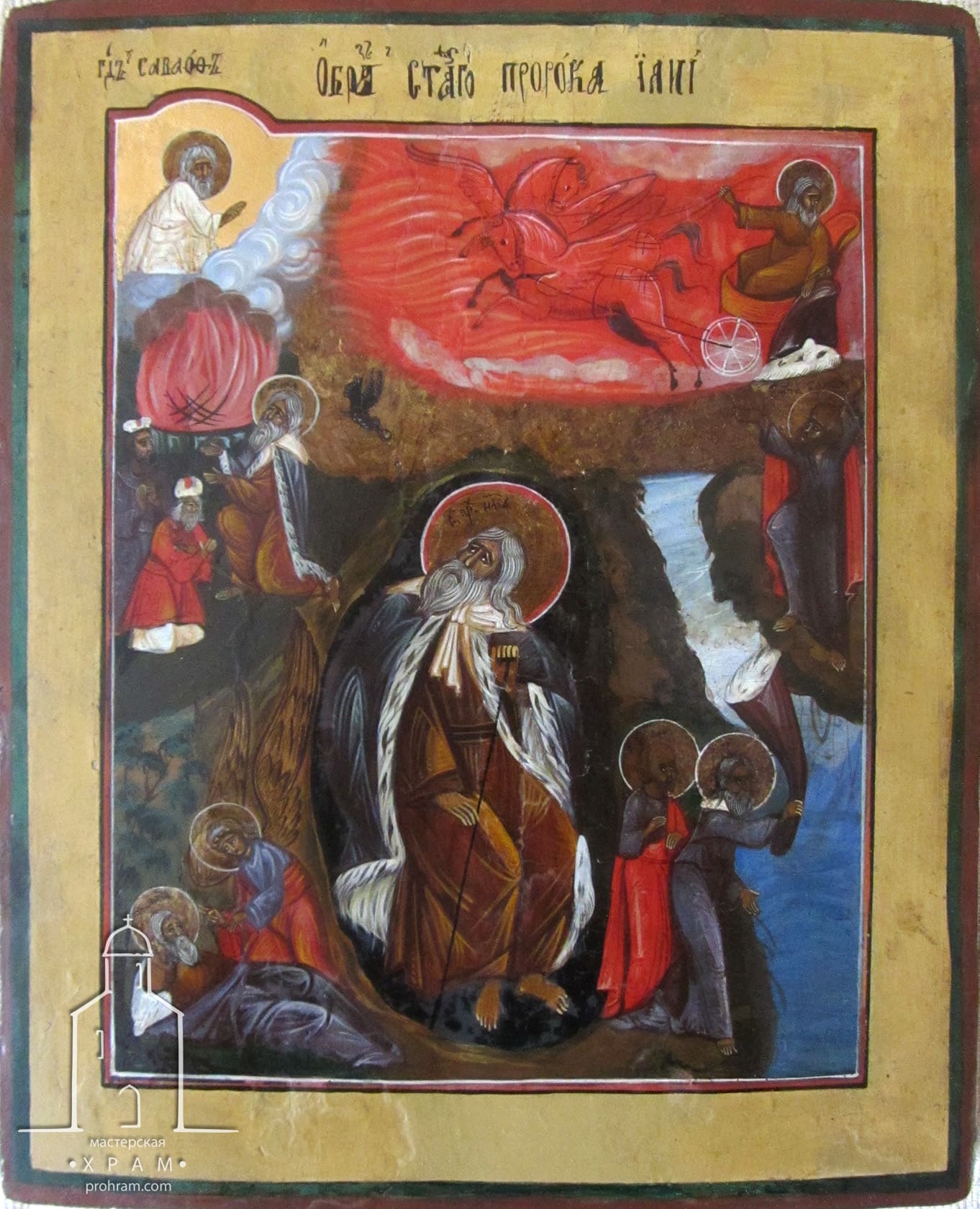 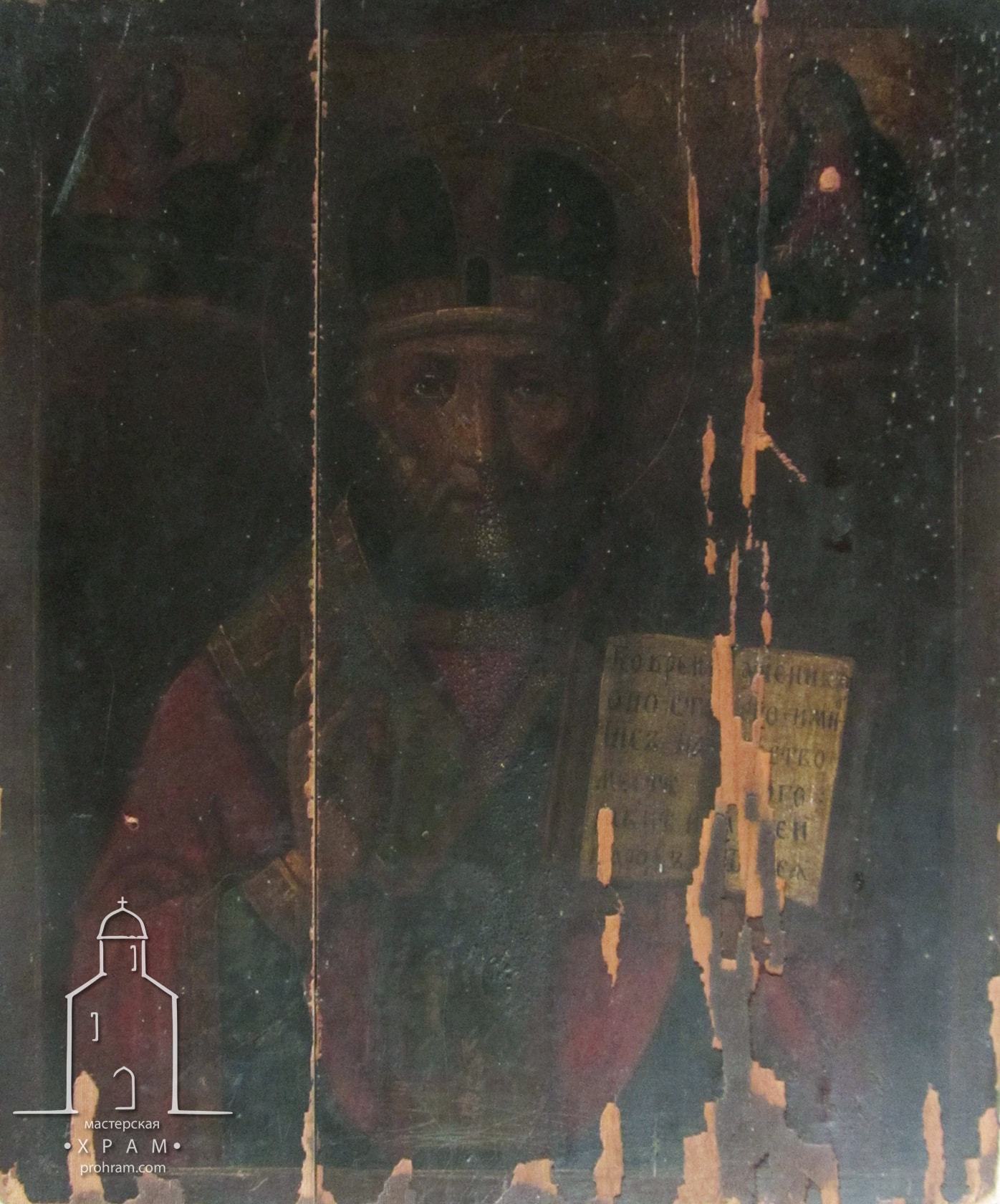 It was split up in two parts with loss of color layer and gesso, soot, dirt, wood damage. 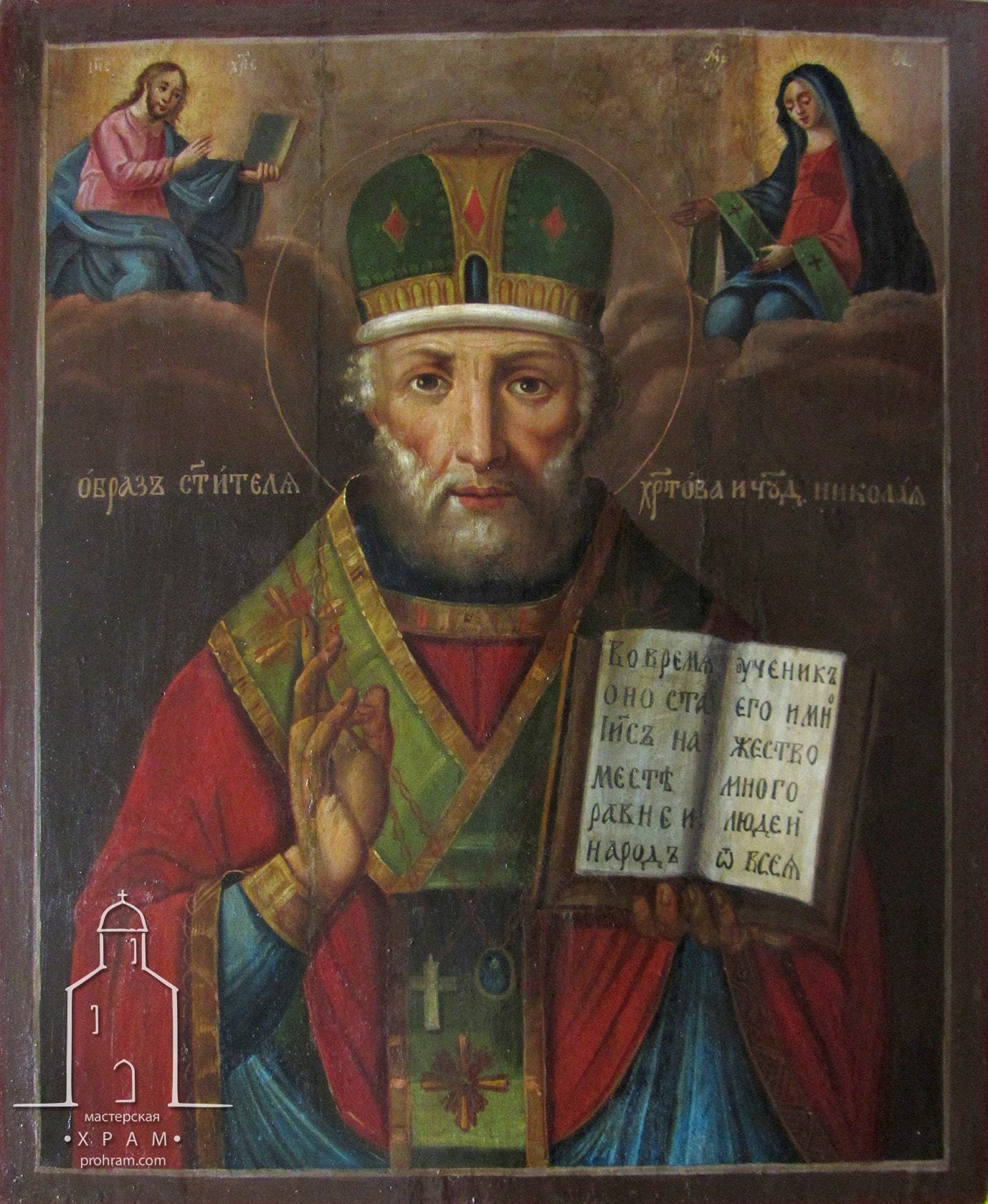