The preliminary drafts encompass the reconstruction concept of the church in honor of the icon of the Mother of God the Seeker of the Lost in Minsk, located at the intersection of Orlovskaya Street and Karastoyanova Street, and a sketch design of a two-storied parish house on the same site. The main task of the church reconstruction was to increase its area, especially the area for the worshippers and the sanctuary, so we used architectural solutions typical of this building and traditional for church architecture in general. The parish house constitutes a single ensemble with the temple and has some features of the Neo-Russian and historical styles. 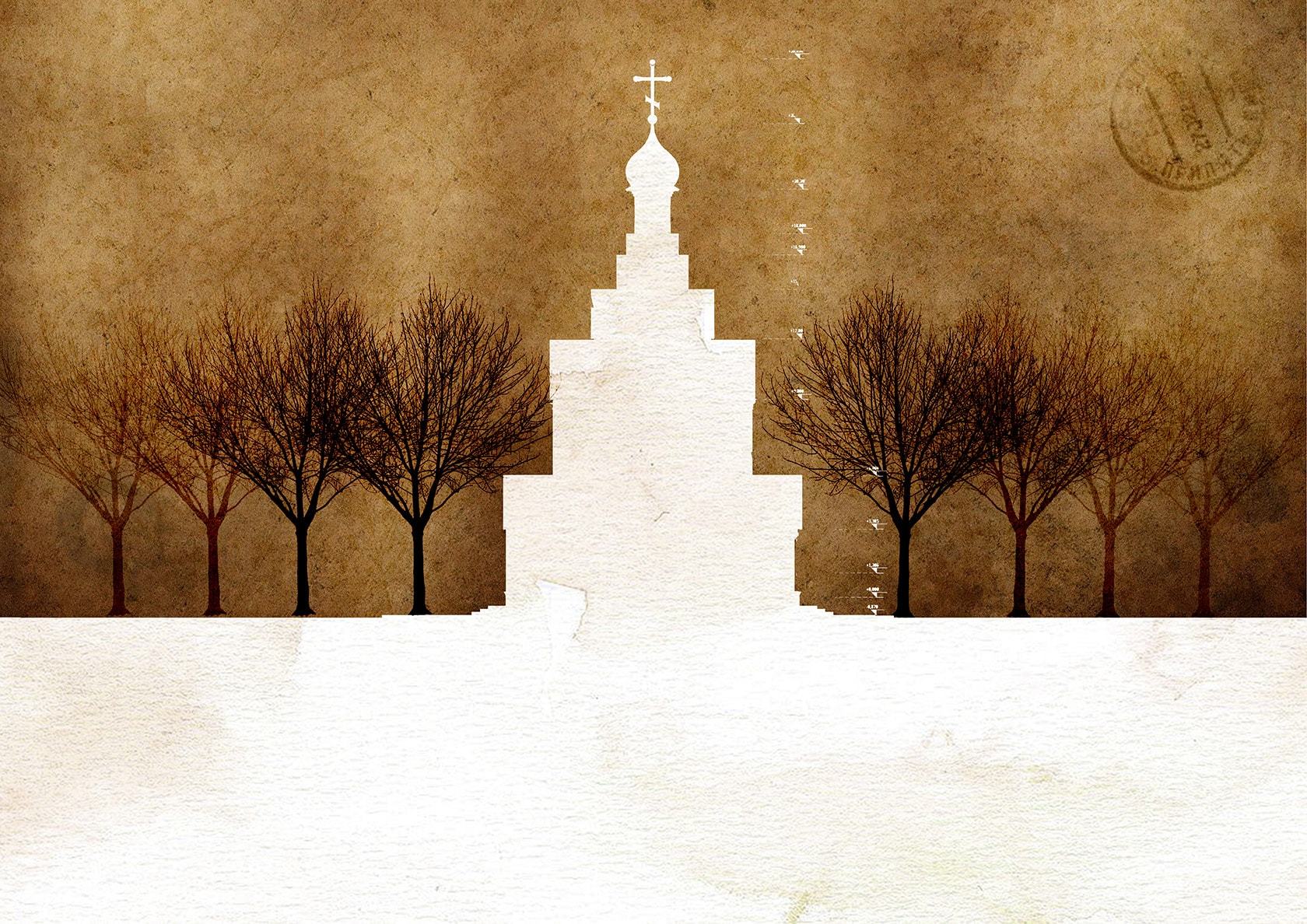 Project: Church in honor of the icon of the Mother of God the Seeker of the Lost.
Location: Minsk, Belarus
Capacity: 160 persons
Total area of buildings: 558 m²
Stage: pre-project studies
Year: 2019

The church to be rebuilt is surrounded by a picturesque park area. The main entrance gates to the territory in the south-west of the site are flanked by two one-storey kiosk buildings with memorial signs. There is a forged metal bell ringer in the eastern part of the site. Given the need to comply with the fire regulations, the project envisages moving it by 3 m. Driveway to the church grounds is from Karastoyanova Street, in the north. There is a business zone with temporary structures in the northern part of the site, separated by a fence from the public access, where the construction of the parish house is planned. Design solutions do not require the transfer of existing underground engineering networks.


The current situation:
The building of the church is octagonal with rectangular spaces of the altar, staircase and two vestibules attached on four sides. It has a hipped top, decorated with kokoshniks, and is crowned with an onion dome and cross. The zakomars of the kokoshniks have a keel-shaped ending on all tiers except the upper one. The adjacent objects also received a keel-shaped roof. The choir loft is inside the main space above the entrance. There are administrative and utility rooms in the basement.

The project of reconstruction implies that the walls of the first level are completed in such a way that the building takes the shape of a square with a pentahedral apse protruding from the east and overlaps with pitched roofs to match the existing roofs of rectangular spaces, and only the roof of the altar apse rises above the space of the narthex and side galleries. The arched windows in the new walls are wider than the existing ones, framed by decorative pillars and have keel-shaped ends. There is a bas-relief on the altar apse in the niche from the outside.

The attached "square corners" on the western side are functionally connected to the central area of the temple by large arched openings and make up a single area for the faithful. Similar areas on the east side include the sacristy, vestry, and two entrance vestibules. The apertures of the two eastern existing walls of the octagon on the right and left of the solea widen to the doors and become the southern and northern gates of the sanctuary.

The parish house with a refectory church is designed as a two-storied building with a basement floor. The building is rectangular in plan with an attached space of the altar on the east side, a four-slope roof and an onion dome. The building is surrounded by decorative ornamental belts on two levels. The arched windows of the refectory temple and the lobby have stained-glass windows and window panes. Decorative forged fence along the ridge decorates the roof of the building. There is a niche with a mosaic image of the Savior Not Made by Hand on the altar's eastern wall. The main entrance with a porch covered with a keel-shaped roof is located to the south. There is an additional entrance, equipped with an elevator for the less able, is located on the north-eastern side of the building. Stairs located at the western end of the building are used for moving from one floor to another. Two additional external staircases to the basement floor are located along the longitudinal exterior walls and have canopies.

The basement of the building contains bathrooms for parishioners, technical rooms and workshops. There is a refectory temple with the solea and the sanctuary, rooms for the kitchen unit and bathrooms for employees on the ground floor. The refectory is divided into two parts by movable partitions and the part that adjoins the altar has a second light and vaulted ceiling. There are offices, a Sunday School classroom and a recreation room with a library, as well as a bathroom for the clergy on the upper floor.

Basic building materials required both for the reconstruction of the church and for the construction of the parish house are bricks for external walls, external finishing with natural stone at the level of the basement and plaster façades with the use of decorative elements made of fiber concrete and (or) natural stone. Roof covering is made of folded steel, painted in dark grey color.

The project is made in accordance with the general architectural and construction regulations and in line with the traditions of temple architecture of the Orthodox Church. 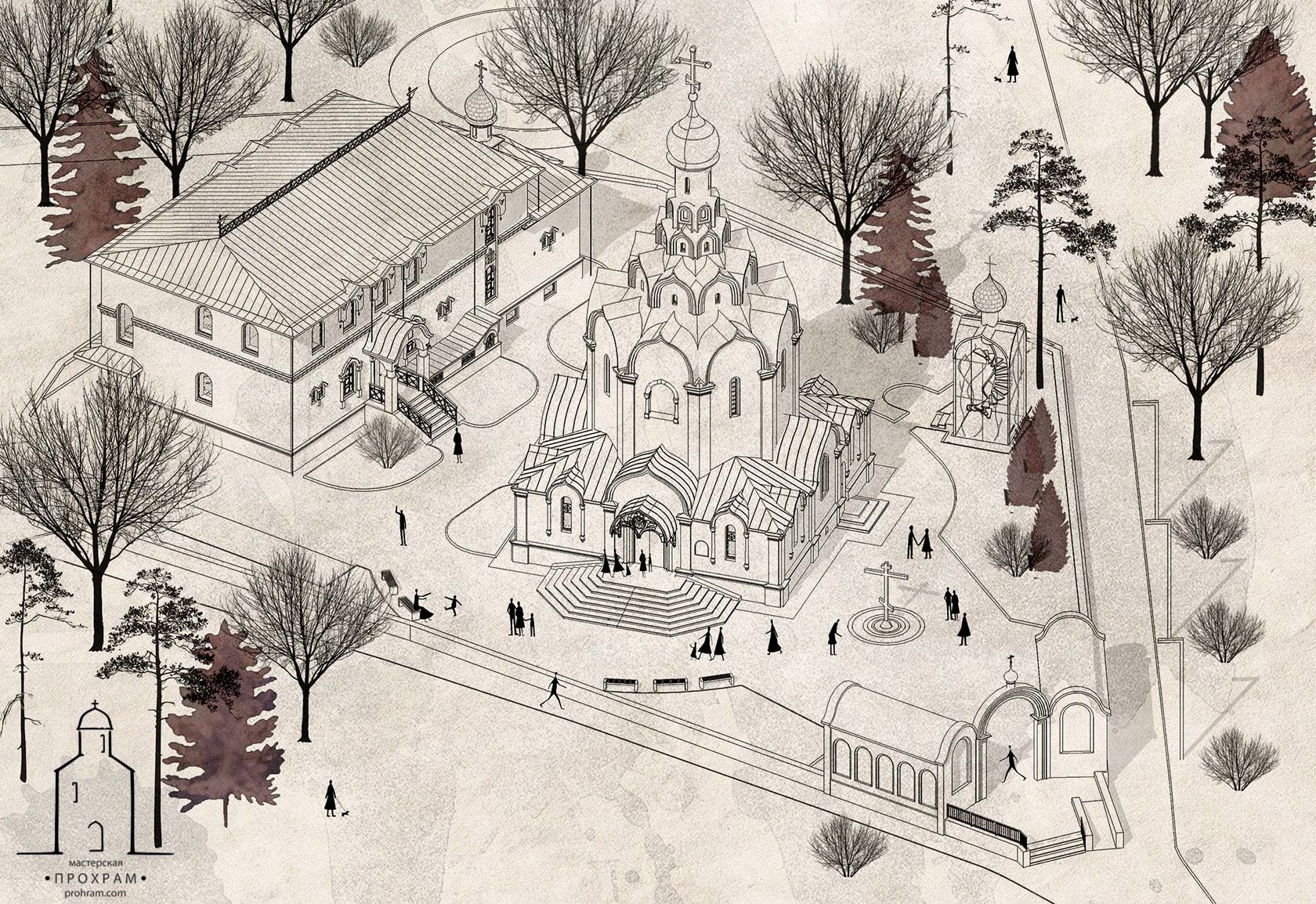 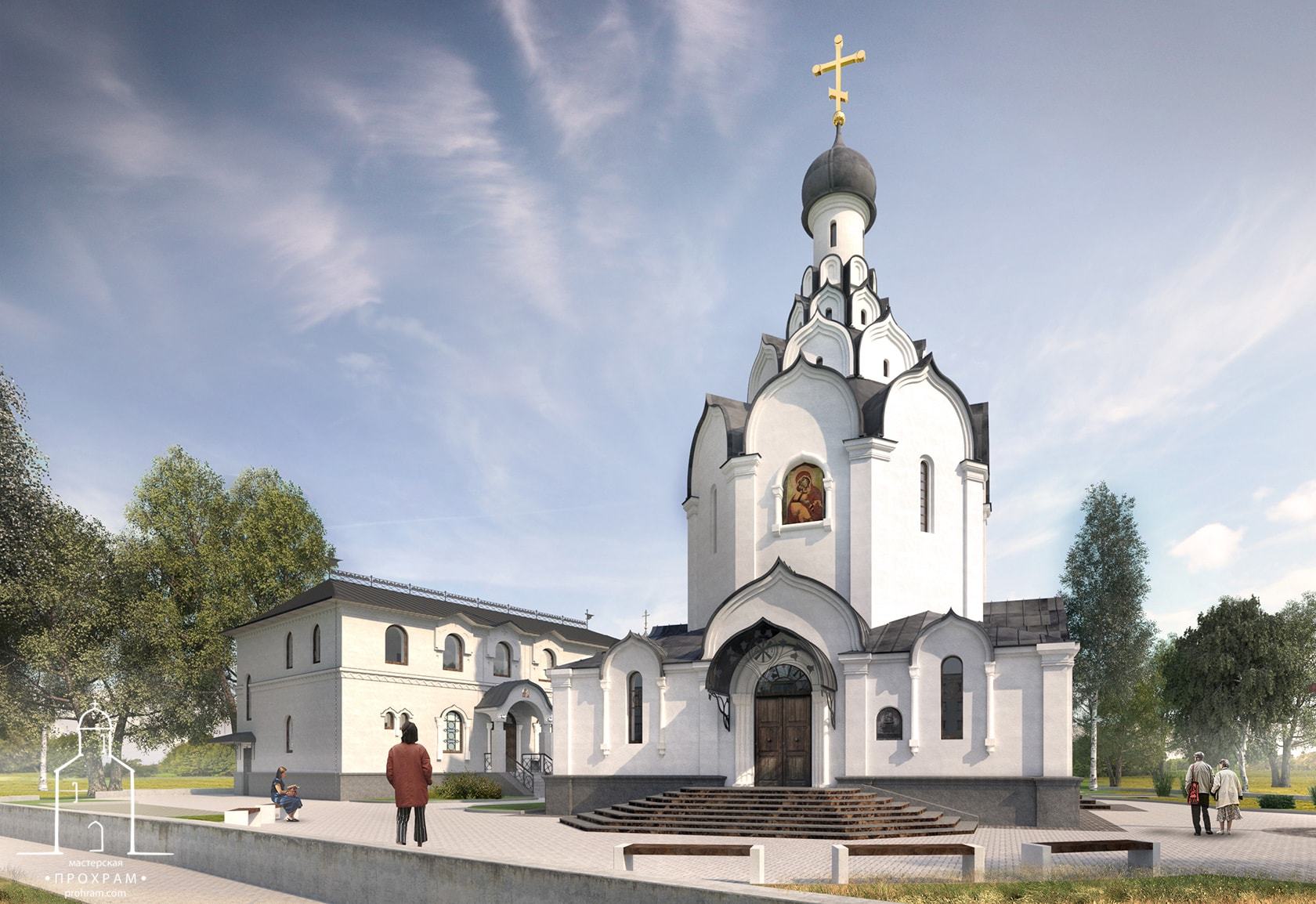 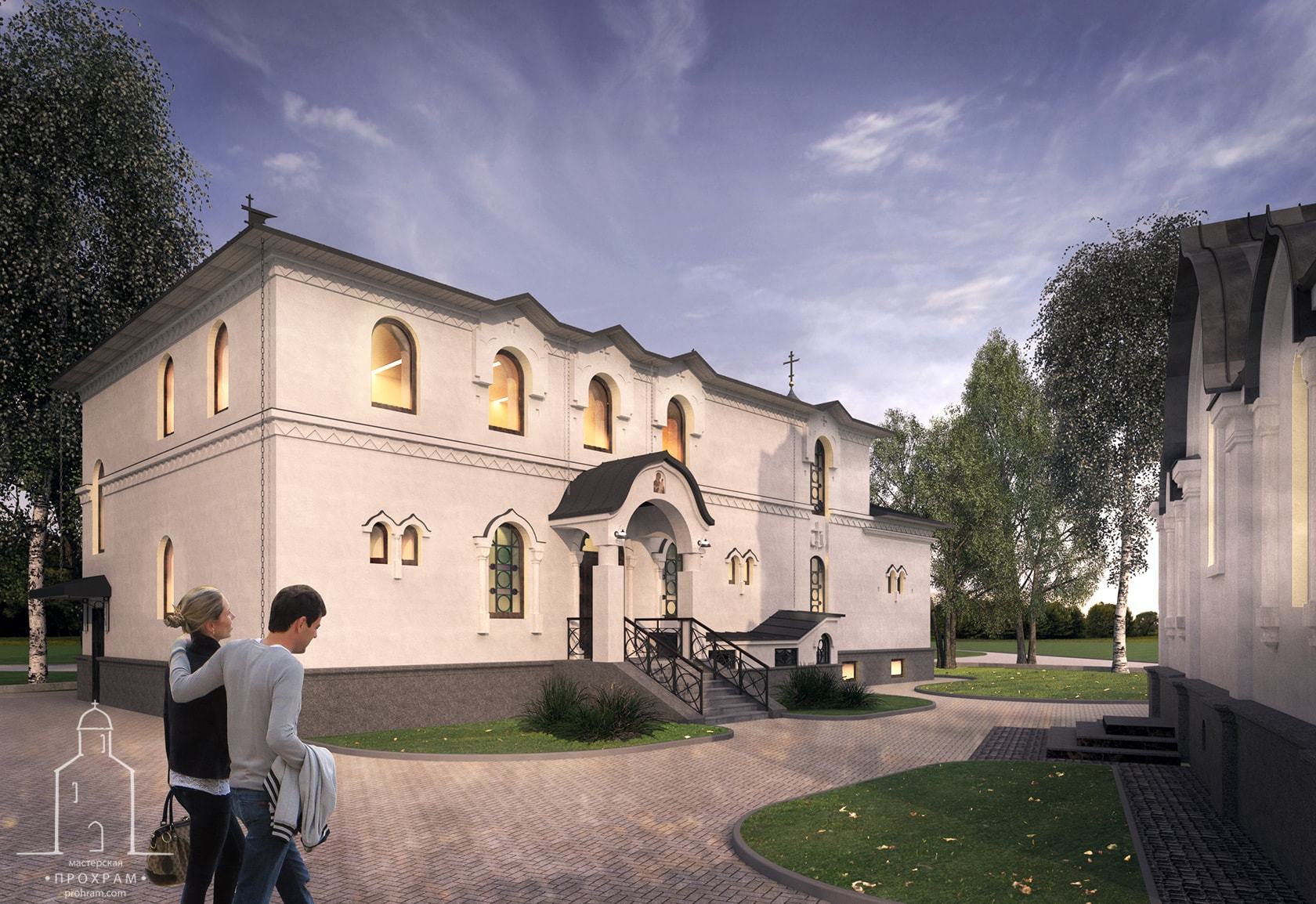 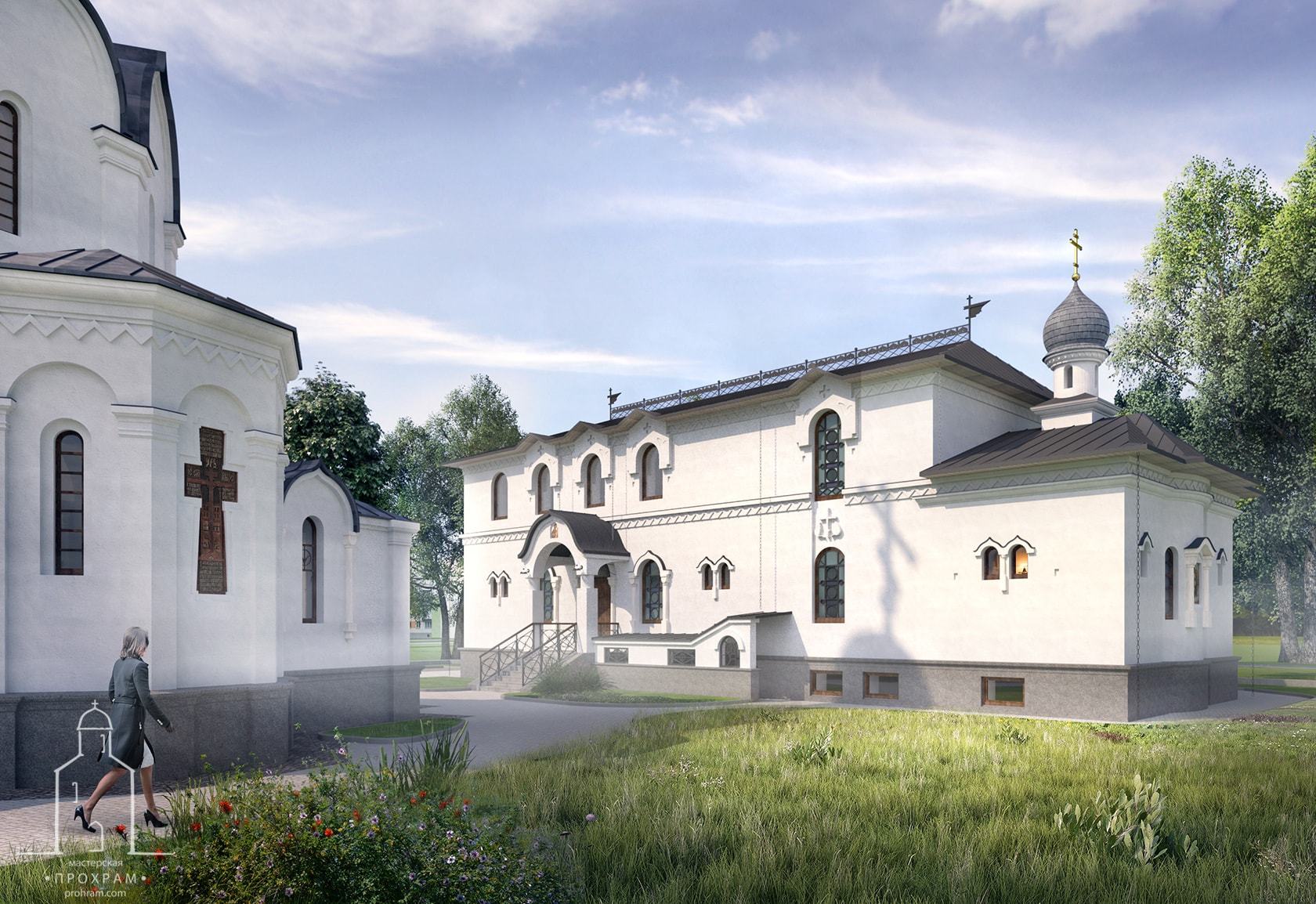 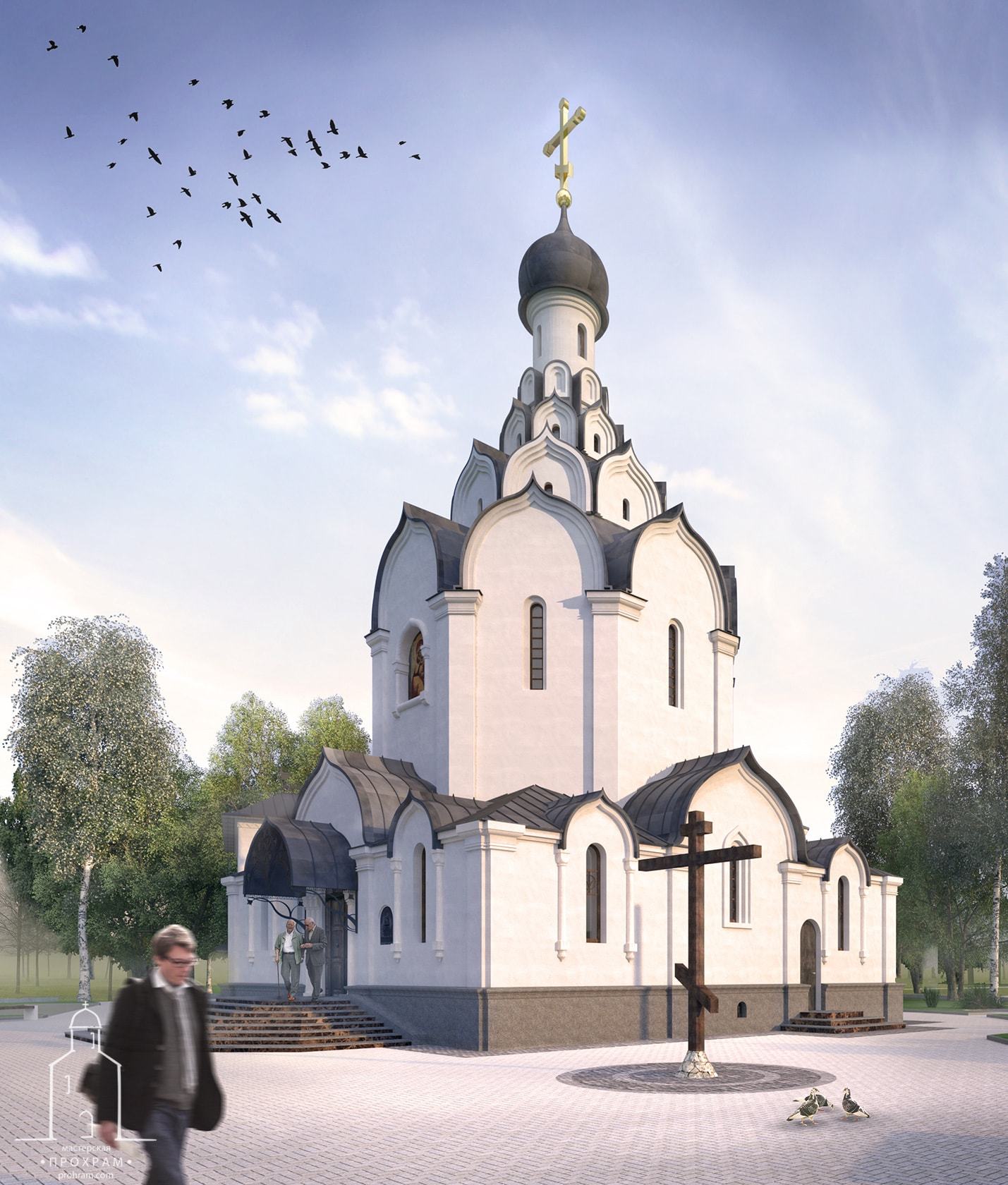