Church in honor of St. Spyridon of Trimythous

The church complex in honor of St. Spyridon of Trimythous is designed in Byzantine style. The main temple is framed by elaborate galleries and connected with the bell tower, stylistically close to the temple bell tower on Corfu Island, where the relics of St. Spyridon rest. The smaller temple is a compact but spacious rotunda with galleries and bay windows. Its architecture is inspired by the early Byzantine rotundas, particularly the Santa Fosco in Torcello (Italy). The parish house complements the architectural ensemble. 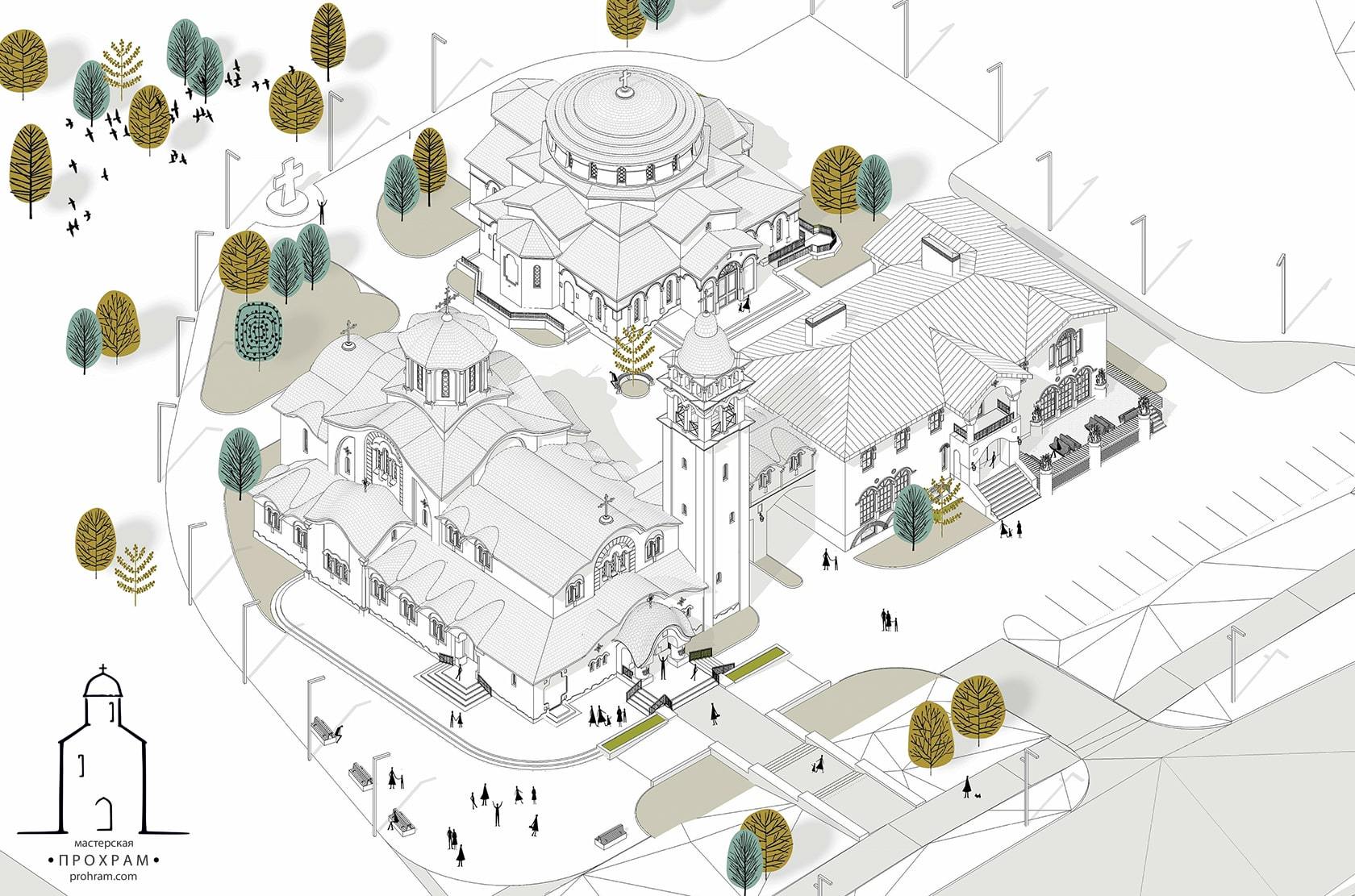 Project: Church in honor of St. Spyridon of Trimythous.
Location: Minsk, Belarus
Capacity: 650 people + Rotunda 350 people
Total area of the main temple: 720 m²
Stage: sketch design
Year: 2019
The site is located in the Frunzensky district of Minsk, with Mazurov Street in the north, Skrypnikov Street in the west. The Divivelka Park is located to the east. In terms of terrain, the site is lowered relative to the streets on average by 1 m. The general plan is designed to ensure fire passage around the buildings and the possible religious processions. There are guest and service parking lots, as well as landscaping, benches, small shapes and fences.
The material of the building walls is brick with the addition of expanded clay-concrete blocks in the parish house. The foundation is reinforced concrete. The roofing is copper and folded metal. The outer covering of the walls consists of facing brick, plaster and decorative elements and bas-reliefs of reinforced fiberglass concrete made to look like natural stone and the literal stone. The seams are treated with lime-cement decorative mortar. 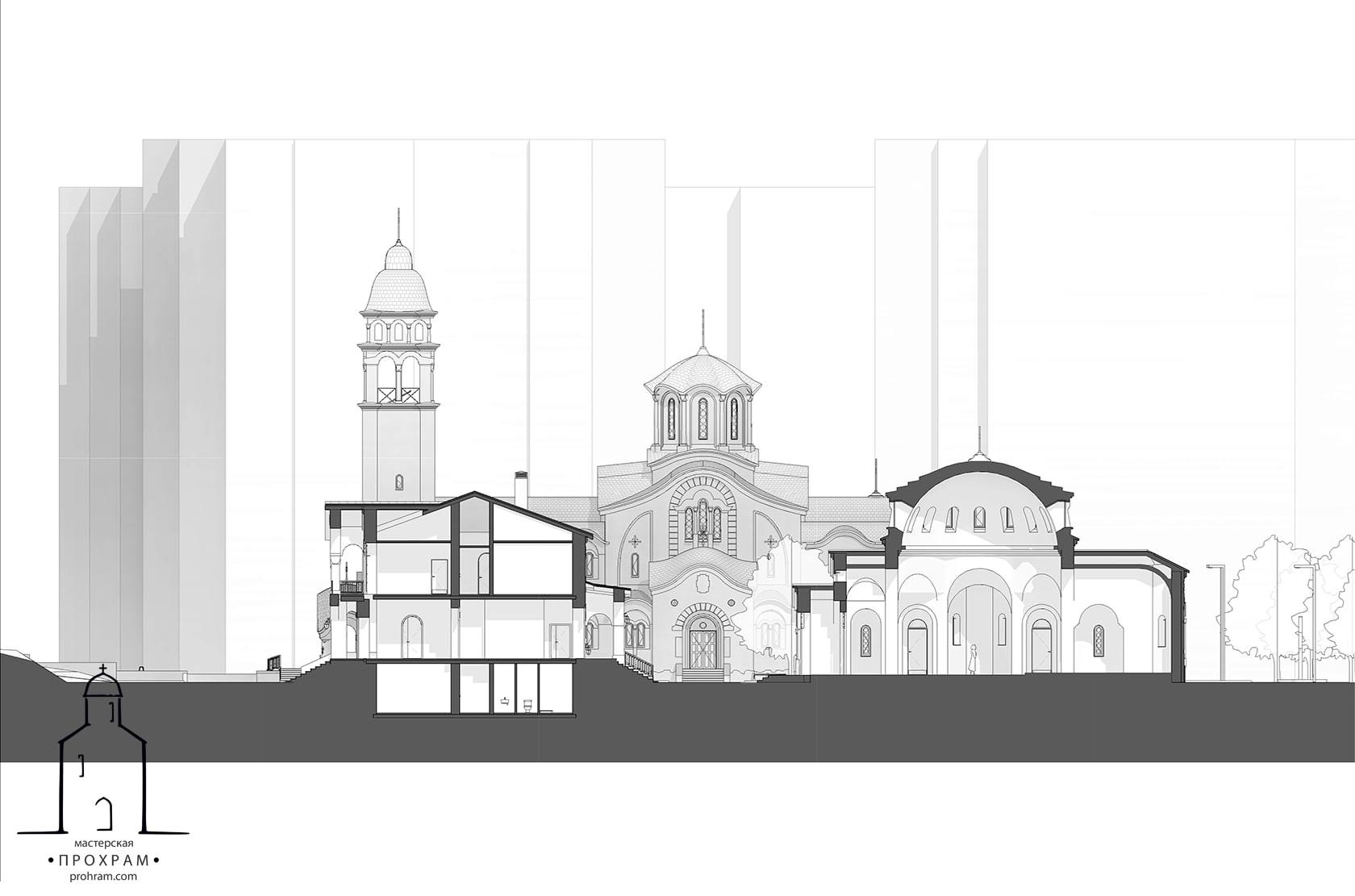 The main temple is designed for 650 people and consists of a narthex, the main space, side galleries, the sanctuary and the bell tower. The church is one-domed and pillarless. The main space is overlapped by four supporting arches that form a cross vault with sloping slits of the decks, crowned with a light drum. On the south and north sides are galleries, expanding the main space of the temple. The galleries are also supposed to contain the Golgotha with a requiem table and an area for confessions. One can get to the sacristy and the vestry through the separate doors of the gallery next to the altar. The sanctuary is located to the east, covered with vaults, and its central part ends in an apse with a conch. The narthex is overlapped with cross vaults. On the second level, there is a choir loft leading to the U-shaped small galleries, the precentor's office, a study, exit to the bell tower and the transition to the parish house. The narthex has a closet, a church shop, the office of the duty priest, and a room for cleaning equipment. The temple is crowned with a traditional Byzantine dome and an appropriate roof system.

The church is raised by 0.8 m on average relative to the ground level. There is one main exit in the building and three additional ones, one of them is adjoined by a ramp for the less able.
Plans, façades, sections of the main church:
The small church can accommodate 350 people. It is a rotunda with a diameter of 10 m and a bypass 3-meter gallery, which is part of the worship area. There is a font on the south side of the temple in a bay window apse with a locker room for those who come to the Sacrament of Baptism, as well as places for a candle shop and to accommodate the choir. There are 3 exits from the temple and a ramp for the less able. The construction of the temple is a dome with 16 light apertures on 4 tromps and 4 subarches. The galleries are covered with cross vaults; bay windows from the south and the north are crowned with conches, there are 2 cross vaults in the altar part and a cylindrical one in the center, ending with a conch and an apse under it. The church is elevated by 0.45 m in relation to the ground level. The façades are decorated with pilasters with arched moldings, mosaic fragments and bas-reliefs, as well as decorative brickwork.
Plans, façades, sections of the rotunda:
The parish house is designed for parish needs and for missionary, educational, social and charitable work. All necessary engineering rooms for the complex are located at the lower level of the parish house. Also, there are restrooms for visitors with a separate entrance from the outside. In addition, there is a workshop and a hall at the lower level. There is a refectory on the first floor of the parish house with an access to the terrace and additional premises, and a church store. On the second floor there are classrooms, offices, and a meeting room with the access through the balcony to the evacuation stairs. The ceiling height of the hall is higher than that of the other rooms on the second floor thanks to raising the roof structure. The passage to the choir gallery of the main church is made through the second floor. The passage itself can function as a separate room for Sunday School classes.
Plans, facades, sections of the parish house:
The sketch design of the compound is drawn up in accordance with the general architectural and construction regulations, in compliance with all necessary liturgical and practical requirements of the parish and in the context of the traditional architecture of the Orthodox Church. 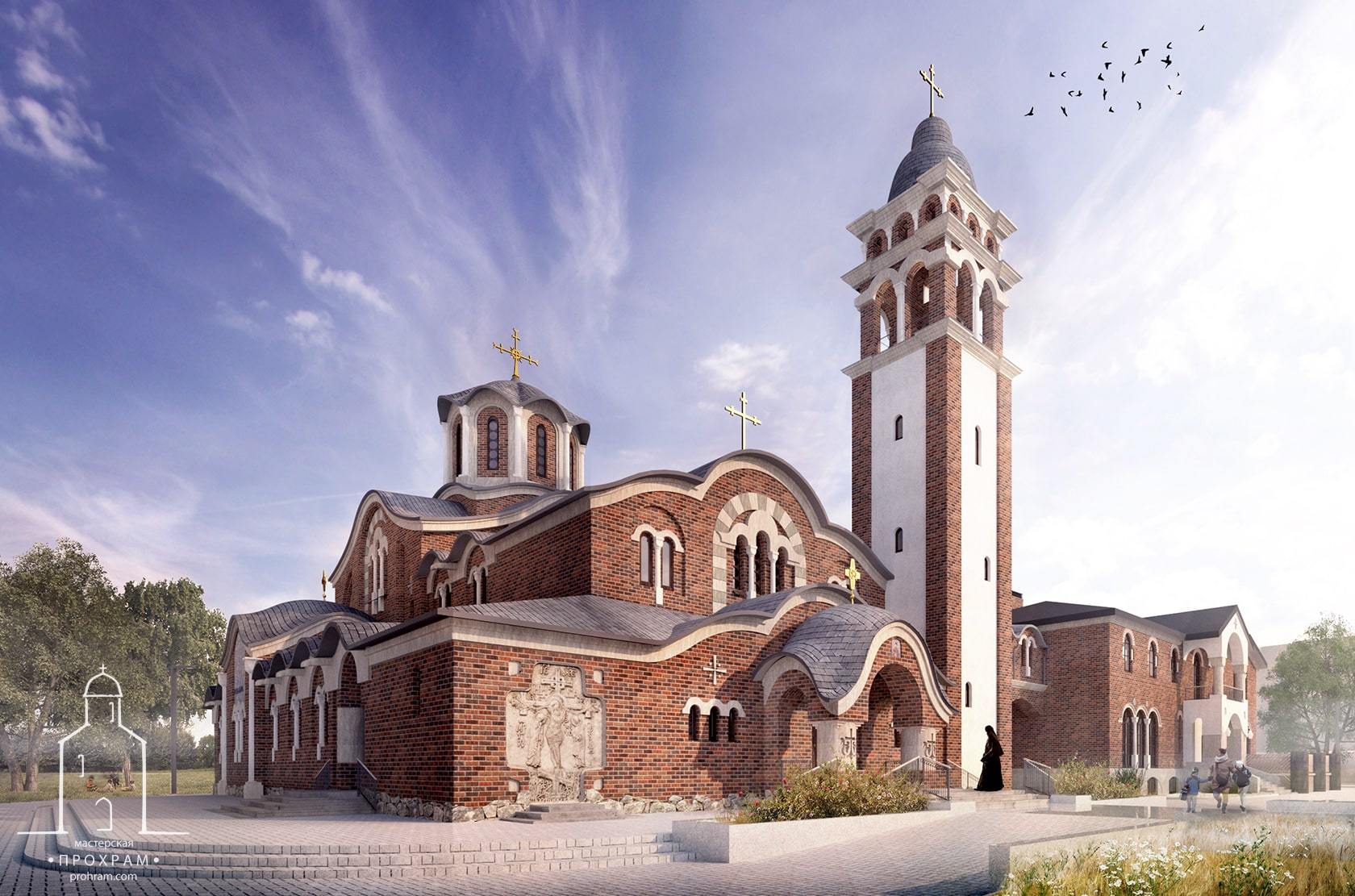 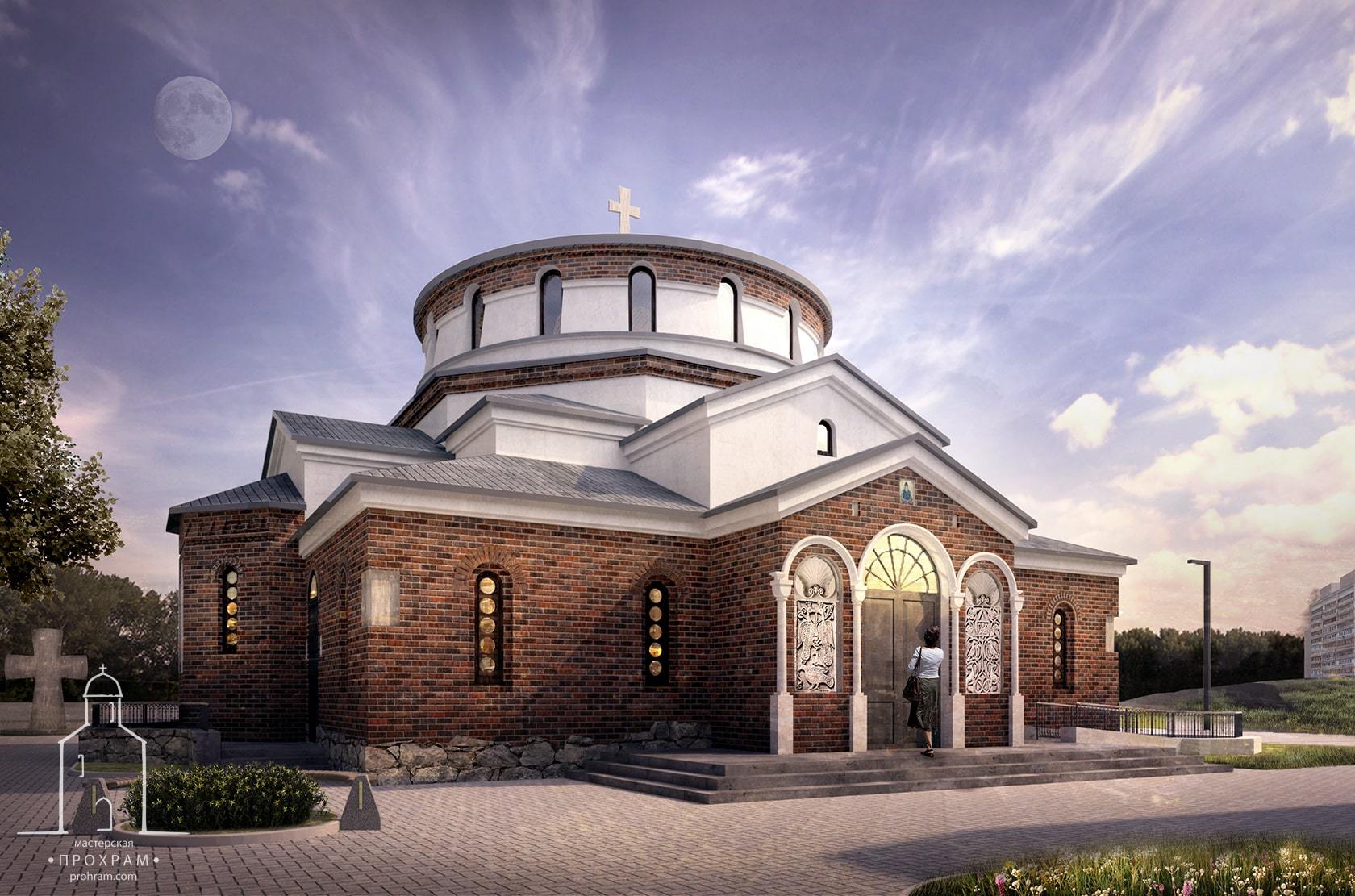 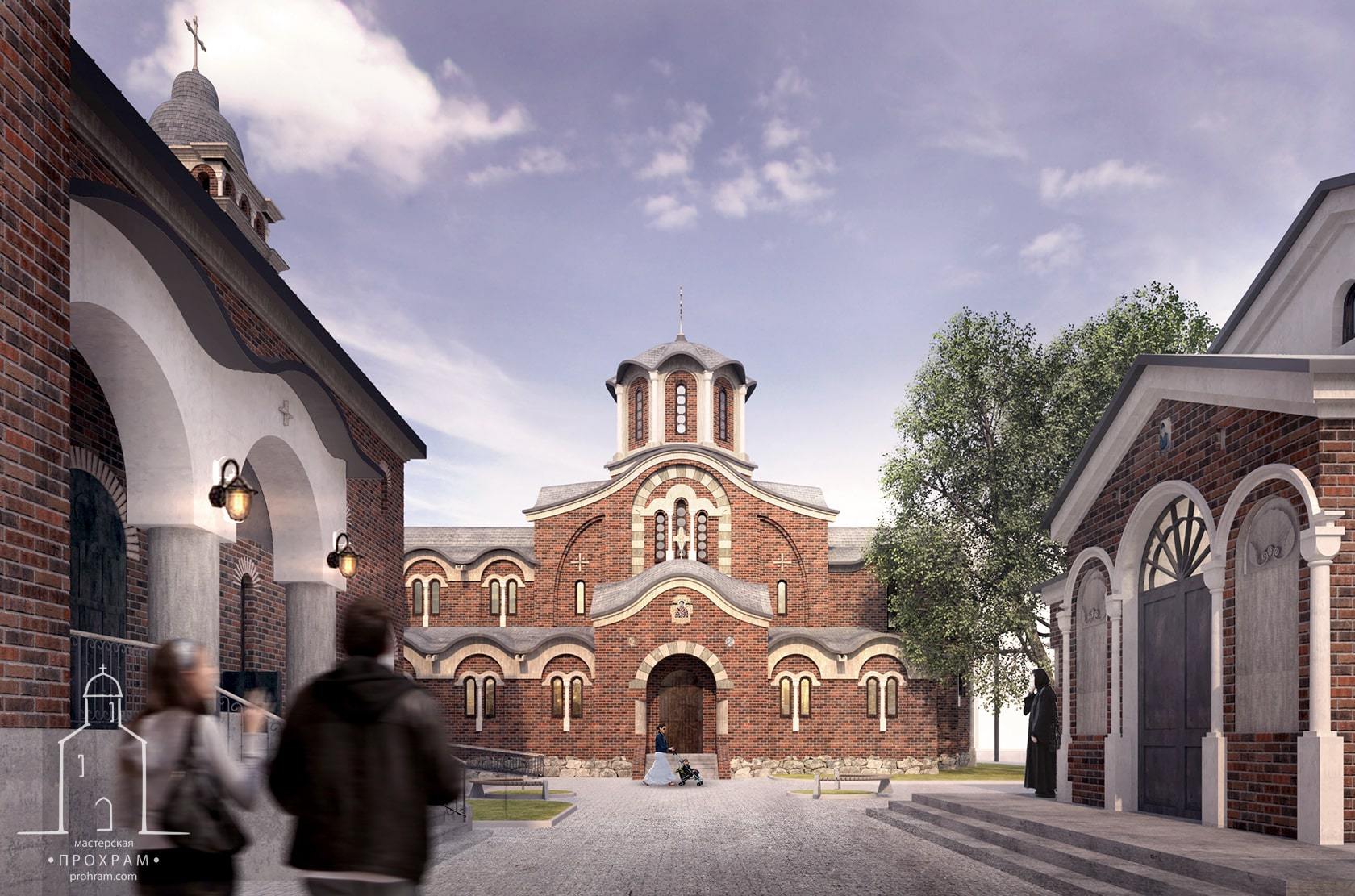 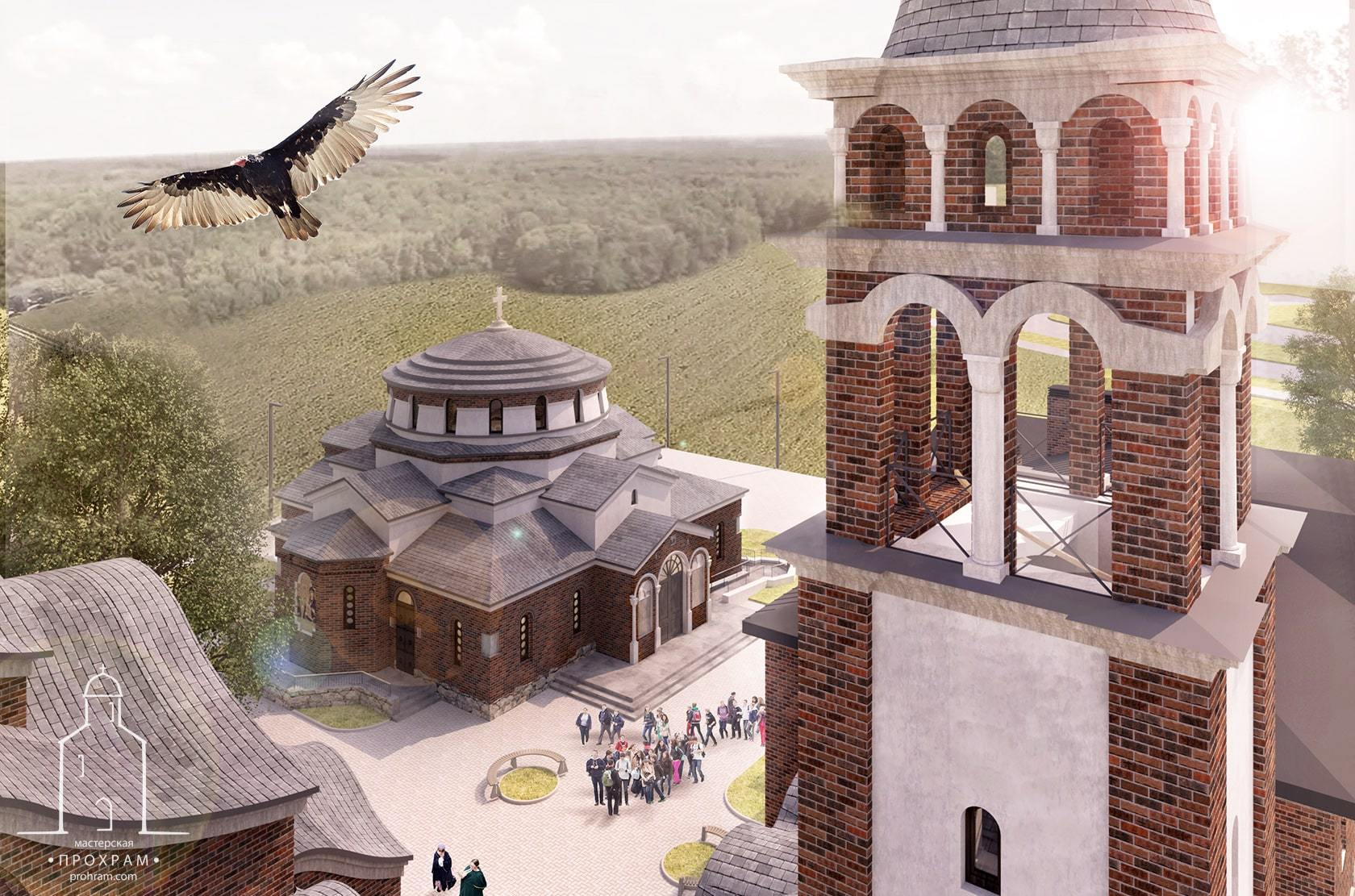 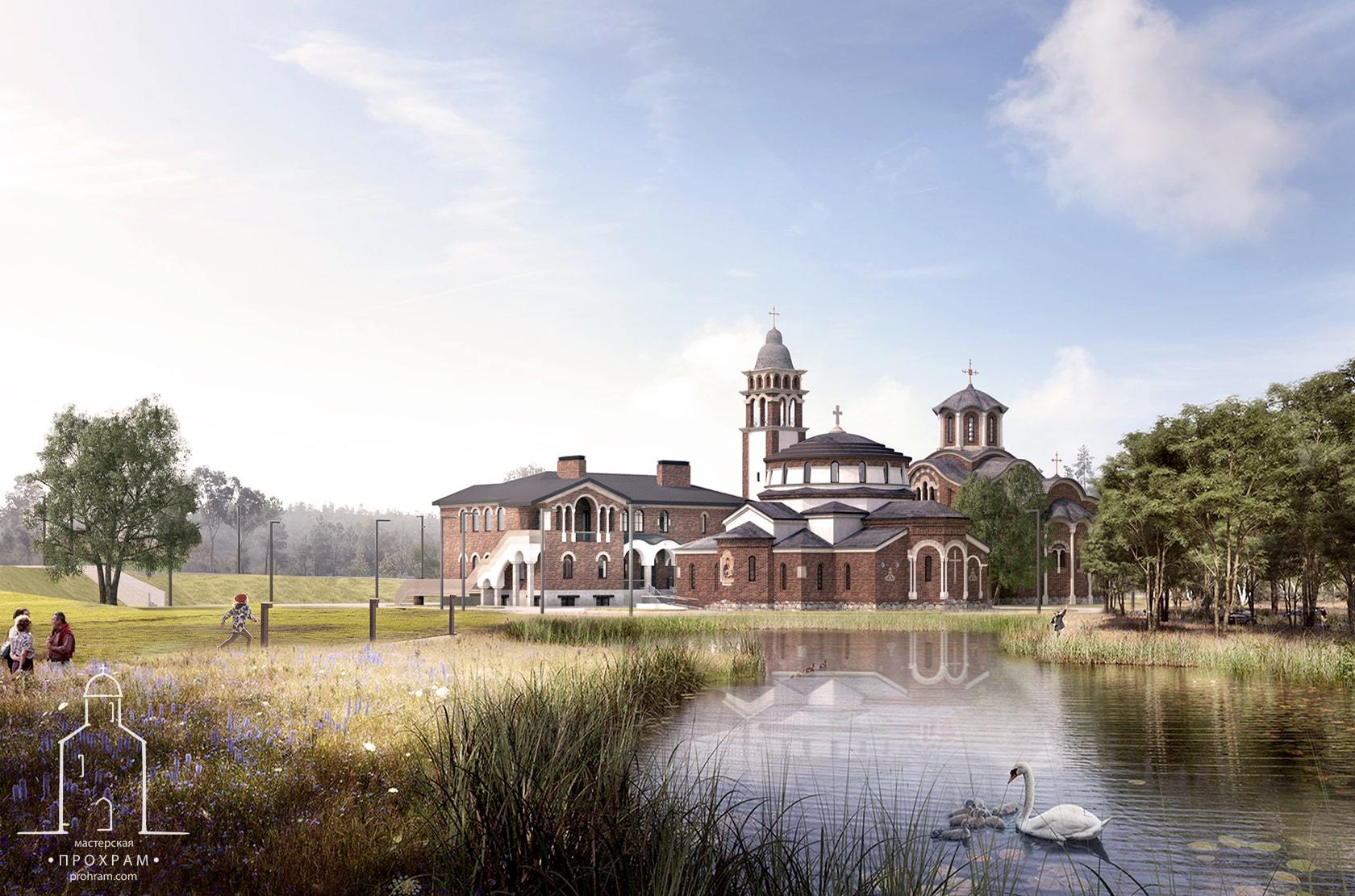 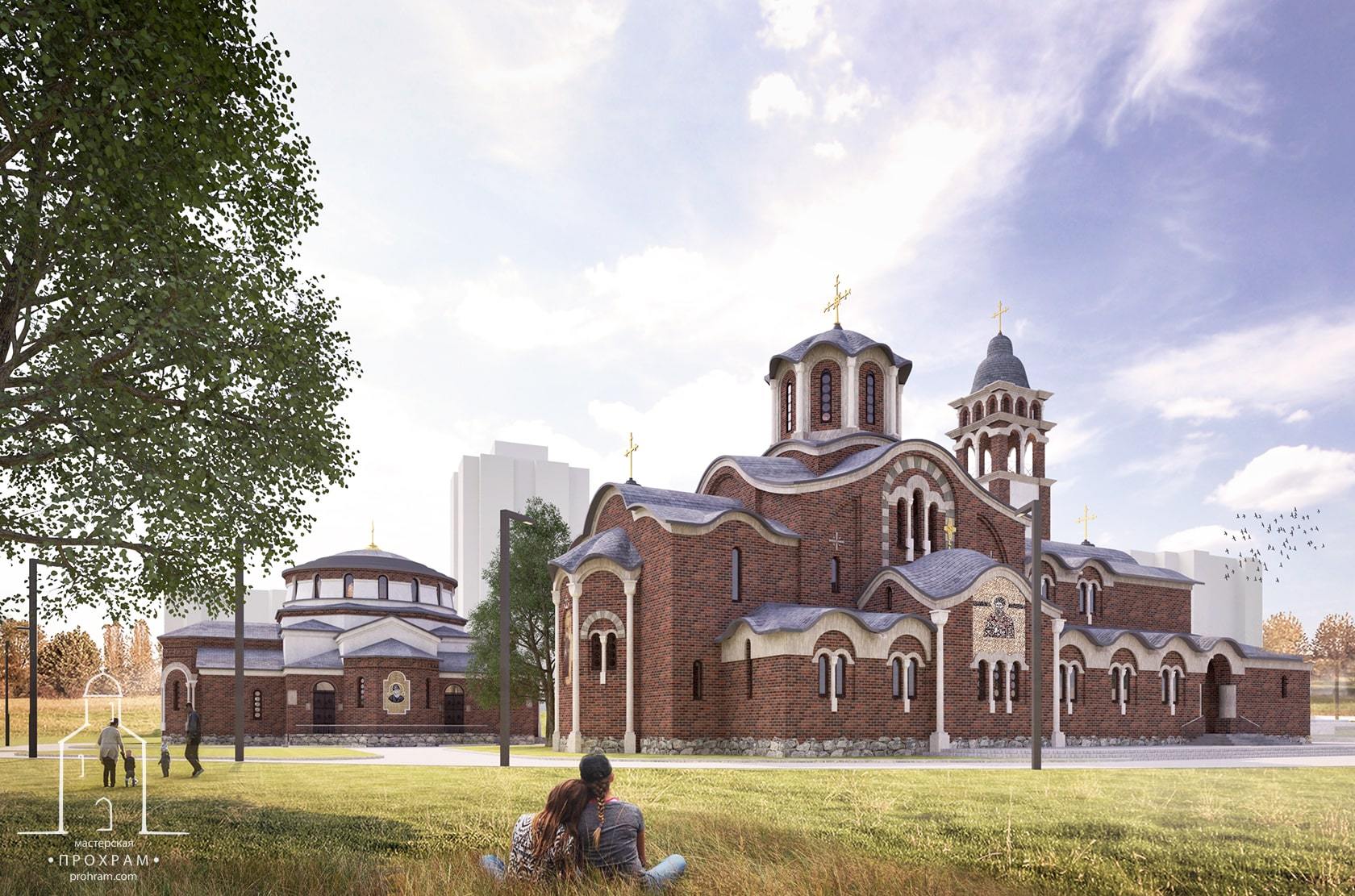 The project was slightly modified during the negotiations with government agencies. The size of both temples has been reduced and the parish house was ruled out, instead of which both temples received basement floors.
The temple:
The rotunda: